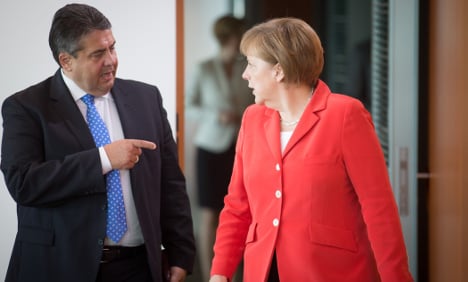 “We need to clear up the suspicion that the BND (Bundesnachrichtendienst, Germany's foreign intelligence agency) helped the American intelligence agencies spy on German firms. That would be a state scandal,” said the vice-Chancellor.

Speaking to Bild am Sonntag, Gabriel demanded that the government hand over to the Bundestag (German parliament) BND documents detailing the spies' cooperation with the American National Security Agency (NSA), even if this were to mean going against US wishes.

“As the German national government, we need to show a bit of backbone,” said Gabriel.

SPD party secretary Yasmin Fahimi meanwhile told the Tagesspiegel on Sunday that “the German chancellor should not be submissive towards the USA”.

But the strong tone of criticism from the centre of the party has also caused ruptures within its hierarchy.

Spiegel reports that foreign minister and fellow Social Democrat Frank-Walter Steinmeier told Gabriel that he considers the call for the release of lists regardless of US resistance as “not well thought through”.

The Christian Democratic Union reacted angrily to criticism from the junior member of the “grand coalition”.

CDU leader in the Bundestag Volker Kauder criticised on ZDF the “shrill tone emanating from the SPD party HQ”.

“One doesn't behave in this way in a coalition,” he said.

The NSA investigatory committee, a parliamentary body investigating the actions of the American spy agency as they relate to Germany, is demanding to see the lists of surveillance targets provided by the Americans to the BND.

But the government is waiting for permission from Washington before it takes a decision on the matter.

German media have accused the foreign intelligence service BND of helping the NSA spy on targets such the Airbus Group, the French presidency and the European Commission.

The key question has been to what extent the BND willingly cooperated as the NSA broadened its surveillance from potential terrorist threats to European officials and businesses – and what the government knew.