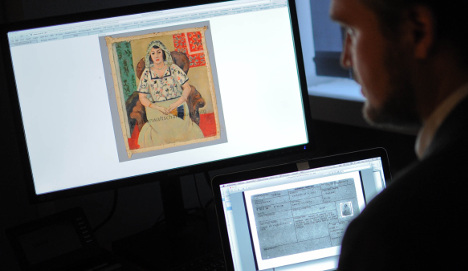 A photo of the returned Matisse painting is displayed on a screen. Photo: DPA

“This is a very happy day,” said lawyer Christopher Marinello, representing the Rosenberg family. “My clients are very happy and grateful.”

The picture, titled “Woman sitting in an armchair”, languished for years in the Munich home of art dealer Cornelius Gurlitt.

It was confiscated from Jewish art dealer Paul Rosenberg during the Nazi period, one of 400 pieces stolen from him – of which 60 are still missing.

Gurlitt inherited a collection of hundreds of confiscated works from his father Hildebrand, who was one of Hitler's four art dealers.

The collection has been at the centre of legal battles after Gurlitt tried to leave all of the pieces to a museum in Bern, Switzerland after his death in May 2014.

Administrators there have agreed to entrust it to the German federal government, but a cousin of Gurlitt's continues to contest the will.

“The past 18 months have been a rollercoaster ride,” Marinello said. “We didn't expect that it would take so long.”

He said that in the future, “there must be a balance between bureaucracy and the claims of the rightful owners.

“We're dealing with people here, some of whom are already very old.”