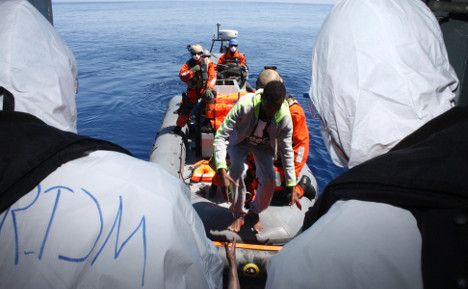 Germam sailors save refugees in the Mediterranean on Thursday. Photo: DPA

At around noon the Hesse took 107 people on board at a point 80km off the coast of Libya, north of the capital Tripoli. The refugees were trying to cross the treacherous stretch of water in a inflatable boat.

Two hours later the frigate picked up a further 102 refugees from an inflatable boat 120 kilometres north of the Libyan capital.

Recent good weather and calm sea conditions have prompted a surge in the number of people attempting the perilous journey, and the Italian coastguard on Thursday said over 2,000 migrants had been rescued from a number of boats since Wednesday.

Some 1,100 of them arrived at the Sicilian port of Catania on Thursday afternoon, including 23-year-old Sandra Kite from Nigeria, who is seven months pregnant and said she was fleeing the violence by Boko Haram Islamists.

“We left for Libya in April 2014 but Libya is dangerous too,” she told AFP after being brought to shore by a British navy ship.

More than 5,000 migrants, many escaping civil war in Syria, have died over the past 18 months while trying to cross the Mediterranean, often on flimsy rubber dinghies or fishing boats.

The European Union firmed up plans to crack down on people smugglers in the Mediterranean on Thursday.

Germany said it was confident of winning UN Security Council approval for an ambitious EU naval military operation, part of a wider plan to stem the flow of people risking their lives to reach Europe from the shores of North Africa.

In an effort to destroy the human traffickers' “business model”, the EU wants to be able to identify, intercept and possibly destroy the smugglers' boats in Libyan waters, something that would require a United Nations resolution.

Speaking on the sidelines of a meeting of NATO foreign ministers in the Turkish city of Antalya, German Foreign Minister Frank-Walter Steinmeier said he expected such approval to be forthcoming.

“My impression is that there is no veto in principle from one of the veto powers in the Security Council of the United Nations.

“It looks to me that at the current moment it more a question of formulations. I hope that my assessment is right,” he said.

Steinmeier added countries were currently deciding at what point it would make sense to propose a draft resolution that would work.

Steinmeier's comments indicate that the bloc does not fear obstacles from veto-wielding non-EU permanent Security Council members Russia and China on the issue.

The EU's proposed naval mission, called EU Navfor Med, already received initial blessing on Wednesday from the 28 member states of the bloc in Brussels, ahead of a meeting of foreign and defence ministers on Monday, diplomatic sources told AFP.

The formal decision to create the mission should be taken at Monday's meeting with ministers then expected to ask the European military authorities to set it up, the sources added.

It should then be launched at an EU summit in June.

Leading countries in the EU — Britain, France, Germany, Italy and Spain – have already promised to deploy warships in the mission to tackle the smugglers in the Mediterranean.

The headquarters of the mission is to be in Rome and will be led by Italian Rear Admiral Enrico Credendino, a European diplomat told AFP.

As part of its bid to deal with the wave of migrants, the EU has also mooted a controversial plan to distribute asylum seekers across member states.

Member state Hungary said Thursday it would fight against binding quotes to take in refugees. Britain has also criticised the plan though it has the right to opt out.

Pressure has grown on governments to act after an overcrowded migrant boat sank in the Mediterranean last month, leaving more than 750 dead in a case that sparked international outrage.

The EU's military force would have to deal with traffickers who are often heavily armed and have charged their victims thousands of dollars for the risky passage.

The EU wants to take the operation step-by-step, starting by collecting intelligence on the traffickers by using radar, satellite pictures and reconnaissance flights.

If the EU wants ships from its members states to enter Libyan waters or capture a boat flying a foreign flag, it needs the green light from the UN under international law.

EU foreign policy chief Federica Mogherini has excluded any kind of ground operation in Libya, a country plunged into chaos with two rival governments and where Islamic State jihadists have a significant presence.