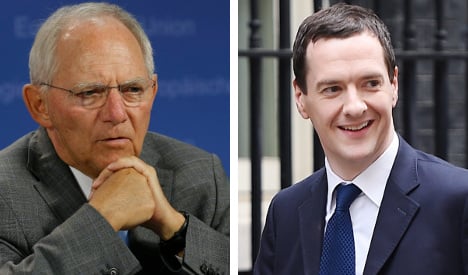 Schäuble told reporters after the meeting that British wishes were “all points where we can find common solutions” – including “making things a bit less bureaucratic, and reducing the possibility for abuse of fundamental rights in the European treaties.”

But the Financial Times reported that Schäuble was in no hurry to meet Prime Minister David Cameron's timetable – and was fed up with “silly” and “unnecessary” interventions in the eurozone crisis from across the Channel.

“The opinion of the German government has always been that we need treaty changes, whenever, the sooner the better,” Schäuble said.

“But the realistic assessment of the German government is that it is not at all certain that this can be achieved quickly.”

He explicitly rejected attaching a package of British demands to any reforms made to shore up the currency union.

Cameron hopes to press other member countries into treaty change ahead of a referendum on EU membership set for 2017, a key promise he made to bolster support on his right wing before last week's parliamentary election.

He has booked a scattergun series of meetings with other EU leaders in coming weeks, ahead of a Brussels summit in June where he will launch his renegotiation effort.

But Schäuble's brusque dismissal of British officials' plan to tack special terms for the UK onto a new push for political and fiscal integration among eurozone members sets the scene for a showdown between the two countries.

“If we cannot complete these things in an orderly way we will have problems,” Schäuble said.

“What it's about is defending and making relevant the structure of the European currency union.”

If necessary, he said, that could be done with a new treaty outside the framework of the European Union – effectively shutting out any attempt by the UK to shoehorn in its demands.

That was a stark difference from UK Chancellor (finance minister) George Osborne, who said in Brussels that he had “a very clear mandate to improve Britain's relationship with the rest of the EU and to reform the EU so that it creates jobs and increases living standards for all its citizens”.