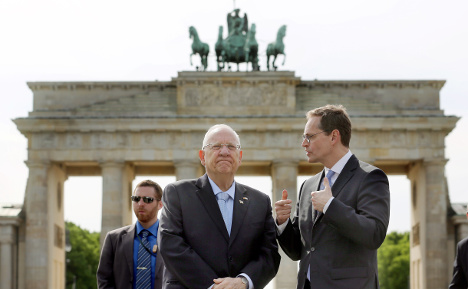 Rivlin arrived in Berlin on Monday, when he visited platform 17 at Grunewald station, from where thousands of Jews were deported to death camps during the Nazi era.

“In a world in which tensions between cultures and ideologies are growing stronger, the struggle against racism, anti-Semitism and fundamentalism demands that we be determined and alert,” said Rivlin during the visit.

He later met Berlin's mayor Michael Müller at the Rotes Rathaus (City Hall) near Alexanderplatz before being received by President Joachim Gauck at Bellevue, the presidential palace.

Speaking to Bild about the relationship between Germany and Israel, Rivlin said that as a student he had protested against his government's decision to open an embassy in Bonn (the capital of West Germany during the Cold War.)

But he said that the relationship that had developed since then was a unique one built on a shared past.

“The Holocaust will always rightly have a central resonance. But on top of that some of the greatest Jewish thinkers were born in Germany.

“Theodor Herzl wrote his works in German. Much of our tradition, and our culinary tradition, originates in Germany. Our Yiddish language is closely related to German.”

Commenting on how Germany has changed since the end of the war, Rivlin said: “Today Germany is a beacon of democracy for the world.

“Many others can participate in this wonderful journey from a dark past to a better future.”

Rivlin's German counterpart, Joachim Gauck, shared in the joint interview concern about rising hate speech against Jews and the state of Israel, both in his country and elsewhere in Europe.

“In Germany too, during demonstrations last year, we saw anti-Semitism, some of it cloaked as criticism of Israel, some of it open,” he said, referring to street protests against Israel's bombardment of the Gaza Strip.

“In addition to a 'traditional' anti-Semitism we are increasingly confronted with anti-Semitism from immigrant families,” he said, adding that this “made me and the overwhelming majority of Germans feel deeply ashamed.”

Meanwhile, the ex-Israeli ambassador to Berlin Avi Primor criticised Germany for not being honest enough in its relations with Israel.

Speaking to the Neue Osnabrücker Zeitung, Primor said: “A long-lasting friendship necessitates that one is open honest and critical with each other. But that has been missing until now in our dialogue.”

Germany feels inhibited by the events of the Holocaust to speak its mind on how Israel acts in occupied Palestinian land, said Primor, who was ambassador in Berlin between 1993-99.

The state visit is set to last until Wednesday.