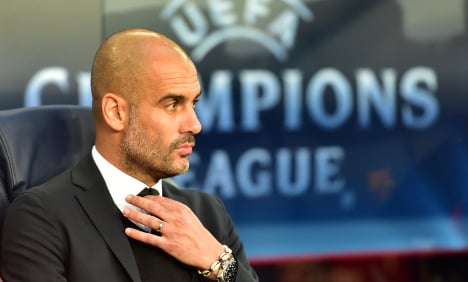 Pep Guardiola: will he be Bayern manager next season? Photo: DPA

With Bayern on the brink of a Champions League exit, and having lost to Borussia Dortmund in the German Cup semi-finals, Guardiola is under increasing pressure and is the subject of growing rumours about next season.

Many are linking him to a summer move to Manchester City, who have had a disappointing system under Manuel Pellegrini, – himself almost certain to leave the English club at the end of the season.

When asked about the rumours at a pre-match press conference on Monday, Guardiola answered with exasperation: "I have already said this 200 million times. I have one year left on my contract and will be here next year."

Over the weekend Dietmar Hamann told Süddeutsche Zeitung that it is "probable or at least very possible" that Guardiola will become the next Manchester City manager.

According to his sources, Guardiola is in "apparently advanced discussions" with the club.

Man City manager Pellegrini has denied reports of the Guardiola switch: "I didn't read it and I haven't heard any reports. I repeat, I haven't heard or seen any reports," he said. "Nobody told me [about them]" he told the British media.

The pressure has risen as senior Bayern figures have expressed their criticism of Guardiola after their 1-0 defeat to local rivals FC Augsburg on Saturday.

"What has made the injury crisis worse is that we let two players go in January unnecessarily," club legend Franz Beckenbauer told Sky.

"I was also surprised by the choice to play three at the back. I thought it was highly dangerous," he added

Despite this criticism Beckenbauer defended Guardiola and said he wanted him to commit to the club for next season.

Former club captain Lothar Matthaus told Sky Deutschland: "Guardiola has already said that their season is over and he's been rotating his team so much that he's unsettling the team.

"His team no longer has the stability they had for over eight months, enchanting football fans up and down Germany. It seems the players are losing a bit of belief in the coach, and he hadn't expected that," he said.

Guardiola's risky tactical setup against Barcelona has been criticized throughout the German media, which is indicative of the pressure he is under, given his reputation as a tactical expert.

Beckenbauer described the substitution of Thomas Müller against Barcelona as "hard to understand", and cracks in the relationship between manager and player were on display when Müller seemed to direct his anger at Guardiola after being taken off. A lip reader suggested that Müller shouted at his coach "Can you cut the shit?"

Tension within the Bayern camp boiled over in March, when long-serving club doctor Hans-Willhelm Müller-Wohlfahrt resigned from his post over a spat with Guardiola.

Bayern may have been recently crowned Bundesliga champions for the 25th time, but have lost their last four matches. They have gone six hours without scoring a goal, the longest period since 1991.

The team is looking rather tired, which won't be helped by the fact that they played 77 minutes with ten men against Augsburg on Saturday. Philipp Lahm spoke of the difficulty of giving 100% every single match.

Zeit gave a damning view of Bayern's current predicament, saying their squad is too old, including World cup Winners Xabi Alonso, Bastian Schweinsteiger and captain Lahm. Far-reaching changes are needed at the club, the paper argues.

Despite the apparent problems at the club, they have the opportunity on Tuesday night to book a place in the Champions League final in Berlin, albeit a small one.

After a Lionel Messi masterclass, Guardiola's men are 3-0 down at the half way stage. One goal from Barcelona would mean that the German champions would require five to progress. To beat the Spanish giants by three clear goals is a mammoth task, but in the past Bayern have shown their ability to score goals in quick succession at the Allianz Arena, with the home support almost sucking the ball into the net.

Striker Robert Lewandowski said: "We have to give everything we've got. We've shown often enough what we're capable of here in Munich. It's not over yet and we'll battle to the end."

Guardiola gave the simple message on Monday: "We will try."

Thomas Müller said at the press conference "My feeling is positive. I'm not euphoric but not pessimistic either. Everyone knows that our changes could be better, but we are FC Bayern."

Perhaps it is exactly this tradition and legend of FC Bayern that will spur the players to a miraculous victory, and save Guardiola's Bayern career.