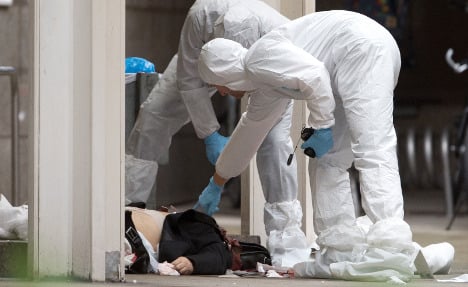 The men were murdered at the entrance to Frankfurt's regional court. Photo:DPA

The murders took place outside the regional courthouse in Frankfurt in January 2014.

Two men, one 45 years old the other 50, were about to stand trial for the murder, which had taken place several years beforehand.

Although a court had previously acquitted them of the crime, the high court had overruled the decision, leading to a retrial.

But as the two men entered the court the murdered man's brother attacked them, firing several shots before approaching them and stabbing them both with a knife.

Now the court has accepted the prosecution case, which argued that the man had sought to exact vigilante justice.

Due to the severity of the act, the man will not have the usual chance to stand for parole after 15 years.

The defence pleaded for a charge of double manslaughter. The accused admitted to killing the men on the first day of the trial in December 2014 but argued that he had acted out of fear for his own life.

The court heard that the feud originated from competition between the car dealerships that the two groups of men owned.

Other famous cases of vigilantism

In June 2014 a man was stabbed to death in Neuenburg, Baden-Württemberg. A 17-year-old admitted to the crime, saying he had acted after the man raped his sister. The accused's father and a friend are said to have been involved. The trial began in April.

A pensioner kidnapped his financial advisor In June 2009 in Chiemsee in Bavaria and held him captive for days in his cellar. The old man believed he had been cheated out of around €2.4 million. The presiding judge at the trial spoke of a “spectacular case of vigilantism.”

In October 2009, 27 years after the death of his daughter, a man had the daughter's stepfather abducted and brought to France so that he could be put on trial for her murder. The doctor had not been found guilty of the girl's murder in Germany but the French court condemned him to 15 years in jail. The father was given a suspended sentence for his act of vigilantism.