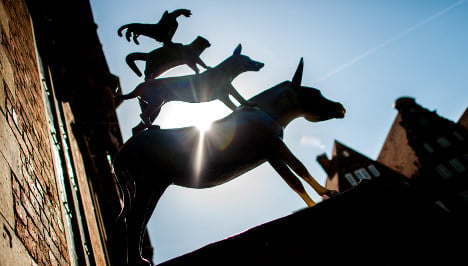 The statue of the "Town Musicians of Bremen" based on the Brothers Grimm fairy tale. Photo: DPA

Official projections on Sunday evening said the two-year-old Alternative for Germany had won 5.7 percent, just above the cut-off mark to enter the assembly of the smallest of Germany's 16 states.

Founded on a call for Germany to leave the eurozone, and taking a populist hardline on law-and-order and immigration issues, the AfD last year won entry into three eastern German state parliaments.

In February it also won seats in the northern city-state of Hamburg, despite internal strife in the party.

In Sunday's election the Social Democratic Party (SPD), which has ruled Bremen alone or in coalition since the end of the Second World War, was again the clear winner.

However it scored its worst result of the post-war era, projected at 33.1 percent, in the city that has been hit by the gradual decline of the local shipbuilding industry and strained public finances.

The same projection, based on 45 percent of votes cast in Bremerhaven and 45 in Bremen itself, gave Chancellor Angela Merkel's conservative Christian Democratic Union (CDU) 22.6 percent, a slight gain.

SPD city mayor Jens Boehrnsen, 66, a silver-haired former administrative law judge, has been in power since 2007, ruling with the ecologist Greens.

That coalition was no longer assured as the Greens, formerly the second strongest party, looked set to gain a disappointing 15.1 percent, losing 7.4 percent to drop behind the CDU.

The Linke (Left Party) was predicted to win 9.3 percent, and the pro-business Free Democrats were to make a comeback to the assembly with 6.4 percent.