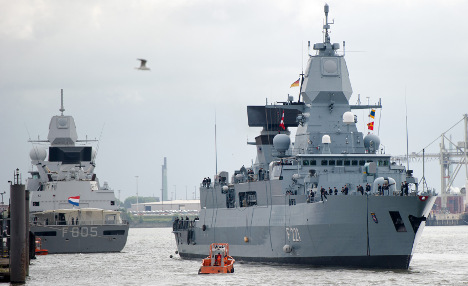 The frigate 'Hessen' is on operation in the Mediterranean. Photo:DPA

In the first operation, the German frigate Hessen went to the aid of a stricken wooden vessel carrying roughly 200 migrants, about 250 kilometres (155 miles) south of the Italian island of Lampedusa.

“We received an emergency call at around 9 o'clock this morning” from Italian authorities, a German defence ministry spokesman told reporters.

He told reporters that, in coordination with Italian authorities, thepassengers were due to be taken to an Italian harbour.

Later a task force supply ship called Berlin picked up around 180 peoplesome 170 kilometres off the Libyan coast, the spokesman said.

The nationality of the migrants plucked from the sea was not given ineither case.

Germany deployed the two ships last Monday around the area off Libya.

At a Brussels summit last month, Chancellor Angela Merkel offered the twoships which were previously used in the anti-piracy mission known as Atalanta off the Horn of Africa.

They are loaded with life rafts, life vests, blankets and medical supplies,and staffed by eight doctors.

On April 19, some 750 migrants were killed when their trawler sank betweenLibya and southern Italy, sparking global outrage and demands for action.

More than 5,000 migrants have died trying to reach Europe's shores in rickety boats over the past 18 months.