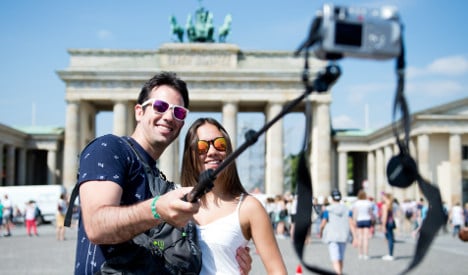 Tourists at the Brandenburg Gate in Berlin. Photo: DPA.

Germany had held onto second place in the past two biennial World Economic Forum Travel and Tourism Competitiveness Index surveys, but slipped to third place in this year's rankings.

The World Economic Forum rated 141 countries across 14 criteria to determine how well each one provided economic and societal benefits in the travel and tourism sector.

Spain took the top spot for the first time, followed by France.
The United States fell behind Germany at fourth place, followed by the United Kingdom at fifth.

Germany performed the best in the category of health and hygiene, rated at second place behind Austria. The country scored the worst in price competitiveness, though, ranked 126 and below Myanmar.

Germany did beat out the former first place winner for both 2013 and 2011, Switzerland, which dropped to sixth place for this year.

Last year, Germany attracted a record number of tourists, with 75.5 million international visitors – the fifth annual record in a row.

The new and growing middle class in countries like China are having more of an impact on tourism across the world, the World Economic Forum report said, as well as Western seniors and the Millennial generation.

Emerging markets such as in Brazil and Mexico made it into the top 30 countries.

"The diversity in the top 30 shows that a country does not have to be wealthy to have a flourishing tourism sector," said Roberto Crotti, economist at the World Economic Forum, in a statement.

"But many countries should still do more to tackle travel and tourism challenges, including visa policies, better promotion of cultural heritage, environmental protection and ICT [information and communications technology] readiness. This in turn would drive economic growth and the creation of jobs."