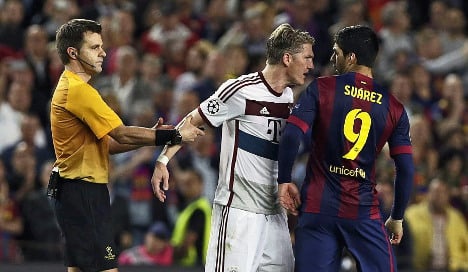 Two goals from Lionel Messi and one from Neymar, all coming late in the second half ensured that Bayern Munich have a mountain to climb in the return leg of the fixture next Tuesday.

The match had been closely fought up until the 77th minute when Messi fired in a shot from the edge of the penalty area. This seemed to be the beating of the Bavarians. The diminutive Argentinian followed up with a superb shimmy and chip a few minutes later before Neymar scored on the counter attack in the dying moments.

“I'm sad, not about the result, but because of how the game went,” said Bayern CEO Karl-Heinz Rummenigge after the match. “The team fought and battled for 77 minutes.”

Pep Guardiola, who was returning to the ground where he had had so much success as a player and a manager said “With all my heart I want to congratulate Barcelona.”

“I am very proud of my team. They deserve praise,” he added.

The challenge now facing Bayern, of overturning a three goals deficit has only once before been achieved in the 23 year history of the competition – by Deportivo La Coruna in 2004. They countered a 4-1 away loss to AC Milan with a 4-0 home victory to progress.