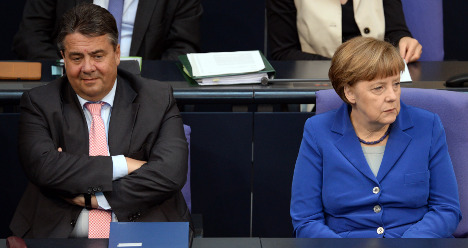 Pressure has mounted over reports that Germany's Bundesrachrichtendienst (BND) foreign intelligence agency snooped on European firms such as EADS, which became Airbus, as well as the French presidency and EU Commission on behalf of the US National Security Agency (NSA).

In the latest diplomatic fallout, Austria's government said Tuesday it had filed a legal complaint against an unnamed party concerning "secret intelligence to the detriment of Austria".

German Economy Minister and Social Democratic Party (SPD) leader Sigmar Gabriel took the affair up a notch Monday, breaking a "taboo" by relaying a personal conversation he had had with Merkel on the issue.

Gabriel, who is also vice-Chancellor, said he had twice asked Merkel if there was evidence of economic espionage.

"Both times the answer was no from the Chancellor," he said, adding he had no doubt she had answered his question "correctly".

However he said that if it turned out that Germany had had a hand in helping the US snoop on companies, it "would be a big strain on the faith of the (German) economy in governmental behaviour".

"Gabriel's strike!" said Bild daily, while Spiegel Online said the SPD chief had "distanced" himself from Merkel. The centre-left Sueddeutsche Zeitung newspaper said the SPD had "attacked" the Chancellor.

Analysts viewed it as a "clever" manoeuvre by Gabriel, whose SPD party, junior partners in the "grand coalition", continues to lag far behind Merkel's conservative Christian Democratic Union (CDU) in the polls.

He brought responsibility over the now weeks-long controversy to Merkel's door, while stopping short of openly challenging her, they said, seeing potential for the three-time Chancellor to take a hit.

Political analyst Jens Walther, of Düsseldorf University, said it was the "biggest crisis" for the coalition so far and "probably for Mrs Merkel, the biggest and most dangerous crisis for her in her 10 years governing".

Carsten Koschmieder, of Berlin's Free University, said he believed Gabriel was frustrated at his SPD's failure to close the gap on Merkel, despite it having successfully pushed through contested political gains, such as a national minimum wage.

"Now the SPD of course sees the opportunity to use this affair to distinguish itself and perhaps also to weaken the Chancellor a bit," he told AFP.

Members of Merkel's Christian Democrats reacted with irritation to the SPD's chosen tack, hitting back at their left-leaning partners with whom they have governed since late 2013.

Merkel on Monday defended the need for German foreign intelligence agents to cooperate with their American and other foreign counterparts to combat international terror threats.

She had previously not gone further than pledging a clarification of the matter.

Data privacy is a sensitive subject for Germans, haunted by historic surveillance by the Nazis and communist-era Stasi secret police, and revelations of US spying in 2013, including on Merkel's mobile phone, caused uproar.

Merkel famously said at the time that spying between friends "isn't on".

But the latest scandal has evolved more into a "who knew what when" issue, with Interior Minister Thomas de Maiziere, a close Merkel ally, so far taking most of the heat as former chief of staff, a post that includes overseeing the intelligence services.

On Wednesday, he is due to appear before a parliamentary intelligence services' oversight committee.

Merkel herself told local broadcaster Radio Breman on Tuesday that she stood "readily available" to testify before parliament's NSA inquiry.

Bild commented that Gabriel's move paved the way for 2017 general elections when he would hope to grab the chancellorship.

"There'll be trouble brewing in the government until the next elections," it said. "That will be bitter for the country."