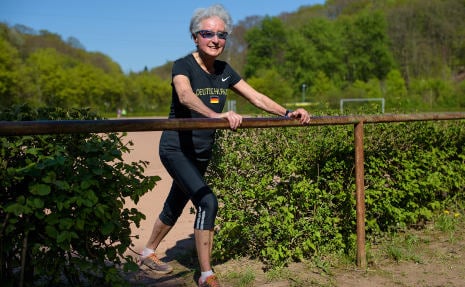 Speaking to The Local just after her 85th birthday celebrations came to an end, Czerwenka-Nagel explained that she was happy that her house was empty again.

“A bit of a break is always good, but I'm just happy that I can get back to my training schedule. A week without it is too long,” she said.

Her schedule is one that sounds as if it could break people half her age: Three 10 km runs a week and a workout in the gym under supervision of a trainer that works out every muscle group in her body.

It's clear that this is more than the work load of a hobby jogger.

“The whole programme is aimed at competing,” she explains.

And it clearly pays off. This year she has won competitions over three distances in her age group.

In August she is travelling to Lyon in France for the World Masters Athletics Championships, 12 days of athletics for competitors aged 35 to 100, each broken down into five-year age groups.

“I have already been putting in times well below the world records, they just haven't been officially recorded” she says, matter-of-factly.

Czerwenka-Nagel is something of a late bloomer. But then she didn't have an easy start in life. At the end of the Second World War she had to flee her native land, the modern-day Czech Republic, and was taken in by an aunt in Karlsruhe in Baden-Württemberg.

At school she was a promising runner, but was too small for the more physical athletic disciplines and was never awarded gold.

It was only when she was 48 that she picked up running again. She was a teacher at the time, and single.

“I was a very anxious person and only ever tested myself mentally. I needed a balance.”

She started running over short distances and it soon became something of an addiction. But it was more than that.

“I was approaching an age when woman go through certain difficult physical changes. I was determined to overcome them in a completely natural way. Running helped keep my blood pressure low as well as bringing a whole host of other benefits.”

At 56 Czerwenka-Nagel finally found love. She met her husband through running and moved with him to Saarbrucken, a town near the French border.

It was at this time that the local running club encouraged her to start competing.

Success came quickly. In her first race she won gold. This encouraged her to compete in the German national championships in 1990. Again she won gold.

Her current haul stands at 46 gold medals and numerous more silvers, in distances from 800 metres all the way up to half marathon.

She has also broken the world record in almost every distance she has competed over. And she still holds two world records, both at 10,000 metres.

But success has not always come easily. Twice she has had to fight back from serious injury.

A week after a 2008 bicycle accident which damaged her knee, she won gold at the German national championships in Regensburg.

"But I was in such pain afterwards. My doctor advised me it would be better if I gave up running. But my iron will saw me through and two years later I was competing again. I won my first race back, breaking the world record.”

'It's so positive for the mind'

Czerwenka-Nagel attributes the fact that she still lives an independent life to her active lifestyle.

“At my age you're normally either dead or in an old person's home. Running has allowed me to escape from that. I'm very happy with my quality of life.”

Running also helped her deal with looking after her late husband who suffered from Alzheimer's for five years before his death.

“Without running I couldn't have gotten through it. It gave me a break. It is so positive for the mind.”

She advises every German to take up some sport.

“Too many Germans sit around on their sofas all day. They should do at least half an hour's exercise daily. It doesn't have to be running – any sport they enjoy.

She has maintained the same weight for over 60 years she says.

“Running and being careful about what you eat. That's the secret. There's nothing more to it.”

Not bad advise to heed. This is, after all, the woman who at 85 will be disappointed if she doesn't come away from a world athletics competition with three world records this summer.