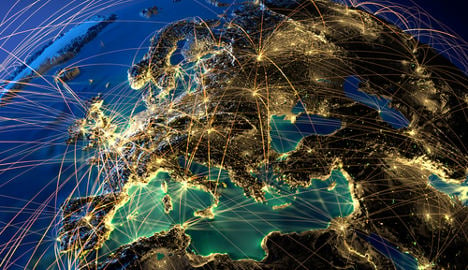 Expats and world-travellers alike are often dogged by this problem on a regular basis as country restrictions block them from listening to a favourite song or watching a show from back home online.

Brits complain that they can’t access the BBC iPlayer outside the UK, even though they may still be contributing toward the broadcaster’s public financial support.

And while Netflix currently boasts a portfolio of 41 country sites, it is still not available in Spain, Italy or most of eastern Europe, Asia and Africa.

An ambitious plan presented by a European Commission group on Wednesday hopes to address these issues, making some hopeful for a more open, international internet. It also promises to bring in an additional €415 billion to the European GDP.

"Europe needs to change to become competitive again," said EC President Jean-Claude Juncker in a video released by the Commission. "Fragmentation and barriers within our single market are holding digital back."

"You can drive from Tallinn to Turin without once showing your passport, but you can’t stream your favourite TV shows from home once you get there."

But does this mean sites like Netflix could suddenly open their doors to all?

Not so fast, say some analysts.

The Digital Single Market plan unveiled on Wednesday proposes a range of sweeping and ambitious measures. The plan hopes to, among other things, get rid of "unjustified" geoblocking, or when sites block or redirect users based on their location.

Consumers face geoblocking when they try to make purchases on a site based in another EU country, but are often either re-routed to a local site with different pricing, or not allowed to make purchases at all.

The plan wants to make copyright laws more streamlined across EU countries, to free up access to content across borders. It also seeks to address high charges for delivery across borders between countries that are very close.

But some digital rights groups criticized the plan for not doing enough.

The European Digital Rights (EDRi) advocacy group told The Local that many of the report’s measures were "watered down" from original statements.

"The commission launched a great balloon of hope and all ambition appears to have been sucked out of it," EDRi executive director Joe McNamee told The Local.

"All in all some measures are not tremendously possible on one hand, but if you consider buying online important and package delivery and geoblocking, then it’s a step in the right direction."

The group noted that the plan calls for getting rid of geoblocking, but that its broad term of "unjustified" geoblocking “means that everything or nothing could be ultimately proposed by the Commission.”

While the EDRi said they "welcomed" the Commission’s plans to make copyright provisions more similar across countries, it also said that the report did not give "any indication of what this will mean in practice."

The Local asked Facebook and Twitter users what they would think of a ‘borderless’ internet and most readers all had the same complaint: GEMA.

The German-based Society for Musical Performing and Mechanical Reproduction Rights (GEMA) is a state-authorized collecting society and usage rights organization that represents tens of thousands of groups in the music industry.

GEMA is responsible for collecting fees for itself and members and its policies often result in disputes over music usage. Many YouTube videos are blocked in Germany because of a dispute between the video-hosting site and GEMA about copyright concerns.

In a statement to The Local, GEMA wrote that it "welcomed" the Commission plan, but also called for "fair remuneration".

"A differentiated consideration of the role and accountability of online platforms is essential for the development of a Digital Single Market shaped by cultural diversity and fair competition. In particular, host providers who participate economically in the use of creative content and compete with licensed content providers have to take responsibility more than before."

GEMA also wrote that the "simplification of the cross-border licensing is crucial for the development of a Digital Single Market for creative content," but also that "the introduction of a single European copyright title would bring no improvement for the rights of users." But whether the EU will be able to loosen any of GEMA’s grip on the music industry is yet to be seen.

"GEMA successfully keeps content off of YouTube and away from individuals in lots of different ways. It comes to Brussels as a lobbying voice of the creative class," McNamee of the EDRi advocacy group said. "Traditionally their position would be against any weakening of their ability to keep content away from Germany."