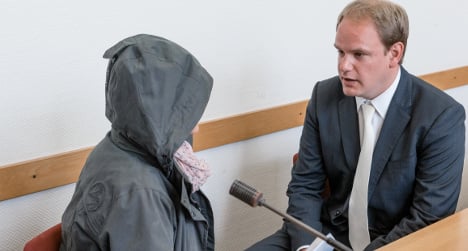 The woman speaks with her lawyer in the courtroom. Photo: DPA

The case became famous last year, when CCTV footage of the woman inserting the sharp objects appeared in national media.

“I wanted to raise awareness that this industrial meat is full of medicines and produced under unspeakable conditions,” the crying defendant told the court.

“I'm very unhappy when I think that I hurt any people.”

Court documents show that the woman may only bear limited responsibility for her crimes, because she was suffering from serious depression and psychosis at the time.

The 60-year-old was sent temporarily to a psychiatric clinic following her arrest in October 2014.

“I've been thinking for a long time about food and the environment, and what's in our food,” the small, dark-haired woman told the court.

She now says that she had taken her ideas too far when she took her pincushion from her sewing box and went to the supermarket, where she inserted a sewing needle into a meat packet in the frozen aisle.

She kept up her campaign of booby-trapping mince and other meat products in different supermarkets around the town of Eutin in eastern Holstein.

One witness said they found a needle while cutting into a pork steak, while another found one in his mouth after biting into a sausage.

“I had bought little bratwursts for my two-year-old niece because she loves them so much.

“When I was sticking them onto a skewer ready to cook, I found a darning needle inside the sausage,” one 56-year-old woman said from the witness stand.

The defendant faces 26 charges of endangering the public by poisoning and dangerous bodily harm – although just two of her alleged victims suffered light injuries.

One woman poked herself in the hand with a medical needle while preparing mince, while a young girl was poked in the gums with a needle when she bit into a hamburger.

The woman didn't meet the witnesses' eyes as they took the stand to recount their experiences, pulling her scarf defensively around her face.