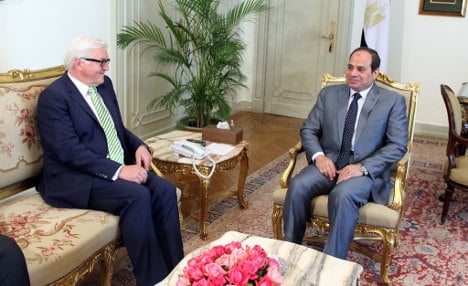 After the meeting with el-Sisi, Steinmeier said that “Egypt is an important partner which plays an important role for the security and stability of the region.”

But the visit faced criticism from human rights and policy experts with whom The Local spoke due to Sisi's controversial record in quelling unrest after his rise to power two years ago.

Sisi rose to power in July 2013, first as the most senior general in a military coup, later voted into the position of president with an overwhelming majority in a 2014 election criticized by human rights NGO the Carter Center for its lack of transparency.

As he consolidated his power in the summer of 2013, street protests were dispersed by the army leading to the deaths of over one thousand demonstrators.

Last month the former president, Mohammed Morsi, who was ousted from power by Sisi was sentenced to 20 years in prison.

“[Steinmeier's visit] is very sad,” Hoda Salah, Middle East specialist at the Free University in Berlin, told The Local, characterizing Germany's attitude to the Egyptian government as one of “closing their eyes” to human rights abuses.

“There are 12,000 political prisoners sitting in Egyptian jails today,” said Salah. “Under Sisi the courts have condemned people to death en masse, something which is still going on.”

“This visit gives these policies legitimacy. It gives Sisi the green light by saying 'we're not looking.' Germany is behaving with this government just like they did with the government of [ex-president Hosni] Mubarak.”

Dr. Stephan Roll of the Stiftung Wirtschaft und Politik (SWP) told The Local that the visit is also a political miscalculation.

“It is not only wrong in relation to human rights, it is also wrong in terms of 'real politik.' The al-Sisi regime is not yet consolidated,” he said, arguing that it is unwise to make relations that are too cosy with a controversial leader of a still unstable country.

Steinmeier's visit to Egypt is the second by a high-ranking German official in recent months, after vice-Chancellor Sigmar Gabriel led a delegation of business leaders to Sharm al-Shiekh in March.

At the Sharm el-Sheikh meeting, German energy giant Siemens signed a deal with the Egyptian government to build power plants and wind energy turbines worth €4 billion. Shortly after this deal was clinched, preparations for a state visit from the Egyptian president to Berlin were made.

The German government had previously said it would not sanction such a visit until long-delayed parliamentary elections had been held in Egypt.

“This was the moment Germany changed its political position,” said Roll of the SWP, the government's own foreign policy think tank. “It is quite clear the two events were interlinked.”

Also likely on the agenda during Steinmeier's visit are renewed weapons sales to the north African state, another lucrative source of business with Middle Eastern states.

“It is no secret that Egypt has previously bought submarines from Germany and is very likely interested in further weapons deals,” Roll explained.

But the talks are also likely to have centred around Cairo's role as a stabilising force in the region.

“Egypt has always been seen by Germany as a stabilizing country. We had very good relations with the Mubarak regime,” explained Roll.

Roll mentions the refugee crisis currently affecting the southern Mediterranean, where thousands of people have already died attempting to cross into Italy and Greece, as one area of likely discussion.

“In Libya, due to the political situation, you have no partner you can really talk to, so the Egyptian government is the only partner Germany has on this issue,” Roll said.

The talks are not likely to have included specific initiatives though, but would have been an attempt to begin discussions on what is a relatively new element of the countries' bilateral relationship, the SWP expert said.

For Salah, the reason that Steinmeier is talking to Sisi about refugees in the Mediterranean is clear.

“They want to find a way of stopping them before they get to the sea.”

But, despite the several controversial elements of the visit, it has attracted little media attention in either Germany or Egypt.

In both places, said Salah, people are afraid of the threat of terrorism and want a return to normality.

“Germans are afraid of Salafism and terrorism and prefer to deal with an Egyptian government that offers stability," Salah said.

“The situation in Egypt is also ambivalent. For the meantime, people are done with strikes and demonstrations.

“Sisi's record is also not all bad. He has left some room for criticism in the press and he enjoys strong support among the population.”

Sisi's visit to Berlin, to take place at the beginning of June, is likely to pass with little controversy in either country, she argued.

Roll agreed that the German public largely supports the re-establishment of good relations.

“Maybe we are not very honest with ourselves. We have an expectation of our foreign policy that it maintains high human rights standards.

"But then when it comes to a deal such as the Siemens one, you ask a German whether it should be stopped due to human rights concerns, they say 'no, why?' It's a case of business as usual."

*This article was updated on May 7, 2015 to correct the follwing factual errors:

The article previously stated that al-Sisi was intermin President of Egypt between 2013-14. Adly Mansour was in fact interim President during this period.

The article previously stated that Mohammed Morsi was sentenced to death. He was in fact sentenced to 20 years in jail.