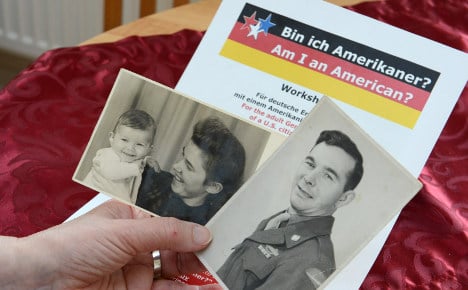 Photos of one 'occupation child' and her parents. Photo: DPA

Many faced social stigma and were long kept in the dark about their true parental origins, with birth certificates that usually said "father unknown".

Now, 70 years after the end of World War II, many German children of Allied occupation forces are breaking the silence on what was long a taboo subject.

"My own earliest memories are: I am not wanted, something is wrong with me," writes one of them, Ute Baur-Timmerbrink, in her new book on the subject, "Wir Besatzungskinder" (We, the Occupation Children).

"I always compared myself with other children and I noticed that they were much more important to their parents than I was to mine," recalled the 70-year-old woman who only discovered in 1998 that her real father was an American GI.

For most of her life she had been kept ignorant about what the rest of the family considered a shameful secret.

When she learnt the truth, her mother and the man she had long believed to be her biological father — a man who was still a prisoner of war when she was born — had died.

It was the daughter of a family friend who finally confirmed what, deep down, Baur-Timmerbrink had long suspected.

"Everyone took the truth to their graves, but I couldn't do it," the friend tearfully told her.

This set the author off on years of research looking for her father, she told a Berlin press conference.

By the time she found out his identity, she also discovered that he had died back in 2001.

Stories like hers have rarely drawn much attention, given the enormous scale of death and suffering wrought by Germany's war of aggression.

But a similar fate affected an estimated 250,000 Germans and 20,000 Austrians who were fathered by soldiers from the United States, Britain, France or Russia, the victorious nations that had split up Germany and Austria into occupation sectors.

Some children were the result of affairs the troops had despite orders not to "fraternise" with German women.

Many of the women were widowed or separated from their interned husbands, and struggling to survive in the war-shattered country.

Most of the children grew up without knowing their father, or, like Baur-Timmerbrink, without even knowing he existed.

Like their mothers, they also faced whispered insults, marginalisation and discrimination.

Even today, the "occupation children" are "often heavily psychologically scarred", according to a study of 146 of them launched in March 2013 by the universities of Leipzig and Greifswald.

"My mother was a 'Tommy whore'," said one participant, using Germany's wartime term for British soldiers. "And me, they called me monkey."

'Today I feel no shame'

The fathers themselves were often unaware of the existence of the child.

This was the case with Margot Jung, born in 1954 in then French-occupied Koblenz.

When she was seven, she overheard a conversation between her mother and grandmother mentioning "the Frenchman".

Despite her suspicions, she didn't dig deeper until 2002, when she resumed the search for her origins.

She contacted the Red Cross, French foreign ministry and other organisations, without success.

One day she decided to take her mother to the places where they lived at the time of her birth. Once there Jung told her she was looking for her French father.

The mother initially said nothing. But the next morning, Margot was amazed to find a note with her father's address in France.

Jung learnt that her father, Jean, had died in 2001, but she did meet her half-sister, with whom she developed a family relationship.

"Today I feel no shame, I can speak freely about my father," she says in the book.

Her own mother also seemed relieved, happy to learn more about the man she once loved.

Later the old lady even dared to show Jung a memento, a crumpled old pack of cigarettes that had belonged to her father, with seven cigarettes and a matchbox still inside, preserved like an icon for decades.

Baur-Timmerbrink now works for the organisation GItrace, which helps children search for fathers who were American GIs, and she has helped facilitate some 200 reunions.

But, she said, often the searches by the offspring, now aged in their 60s and 70s, lead nowhere and insisted that "we can't promise anything".

In many cases the fathers or their families decline contact, choosing to ignore rather than dig up the past.