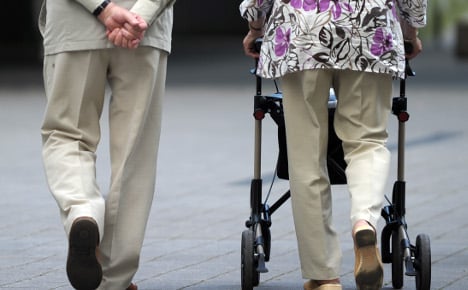 While breaking into a house in Düsseldorf in the early hours of May 1st, the nearly 70-year-old man and an accomplice stole jewellery and cash worth around €1,600 before being seen by the unsuspecting residents as they returned home.

After his accomplice made a getaway through the kitchen window, the older man attempted to follow suit, jumping from the balcony into the garden, but lost his glasses at the crucial moment.

Perhaps in his younger days such a manoeuvre would have been no problem, but this time the elderly burglar sustained serious injuries that prevented him from escaping.

That left him celebrating his 70th birthday over the weekend with police guards in hospital.

Officers discovered tools used to break in and a getaway outfit in his nearby car. His accomplice, whose age is unknown, managed to escape from the scene.

The pensioner's career on the wrong side of the law spans an extensive list of offences over a 42 year period, with his first ever conviction dating back to 1973.

In Düsseldorf alone he has been convicted six times, and he has taken his game to national level resulting in trials in Munich, Hannover, Passau (Bavaria) and Dortmund.

A spokesman for Düsseldorf police told The Local that he has built up quite a reputation with the police after his many convictions over the years.

But this isn't the oldest burglar  police there have come across, with "numerous older ones in neighbouring cities."

A few years ago a 75 year-old from Hessen attracted attention for a criminal record spanning six decades, which included two dozen convictions.

In other pensioner crime news, a 72 year-old was caught in the act as he tried to walk off with a chicken in Münster at the weekend.