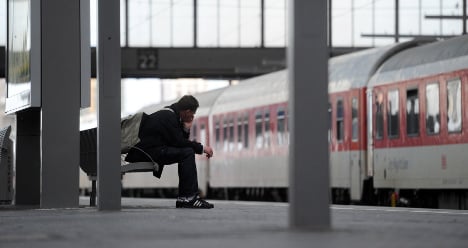 A man sits on a platform at Munich main station on Tuesday morning. Photo: DPA

Rail operator Deutsche Bahn (DB) said that around one-third of long-distance services and between 15 and 60 percent of regional trains would be running.

Passengers can check whether their service is running on the DB website.

Eastern Germany, where membership of train drivers' union GDL is strongest, is likely to suffer the largest percentage of cancellations.

“We know that passengers aren't standing on the platforms clapping with enthusiasm,” GDL leader Claus Weselsky said on Tuesday.

But the defiant union leader said that he had refused a fresh offer of mediation from bosses at DB in an interview on ZDF television on Monday evening.

“We won't settle over our fundamental rights,” Weselsky said, adding that court decisions during previous waves of strikes had shown that the union was acting within the law.

GDL is in a race against time to achieve its goals before the introduction of a new law governing wage negotiations, which would hand most of its power to represent staff to the rival Rail and Transport Workers' Union (EVG).

But the union accuses DB of playing for time while waiting for the law to come into force.

The rail company hasn't yet offered GDL the five percent wage increase and one hour reduction in working time per week that it's seeking for its members.

Chancellor Angela Merkel joined calls for the two sides to come to agreement, saying that “all of us are keen to see a solution”.

Half a billion lost

While the strike meant wasted time for people on their way to work by train and city S-Bahn (local rail) services, businesses warned that the six-day walkout could cost up to half a billion Euros.

The Federation of German Industry (BDI) warned that the steel, chemicals and car industries would be particularly hard hit by the strike because of their reliance on regular deliveries of parts and raw materials.

DB says it will operate between half and two-thirds of freight trains using drivers who haven't joined the strike, either because they are not GDL members or because they are civil servants and can't down tools.

But the state-owned company fears a “massive loss of business.”

“Above all, our image as a reliable carrier is in danger,” DB logistics chief Karl-Friedrich Rausch said on Monday.