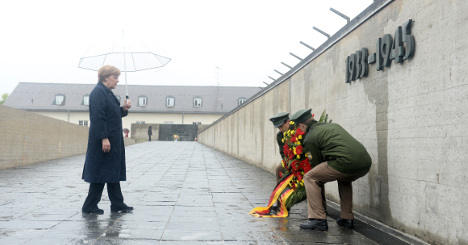 American army trucks rolled into Dachau, northwest of Munich, on April 29, 1945 to discover the unspeakable horror that had led to more than 41,000 people being killed, having starved or died of disease.

Similar 70th anniversary commemorations have taken place at other former camps this year, beginning in January with Auschwitz in what was Nazi-occupied Poland, but Dachau is the only one Merkel has attended.

Under heavily pouring rain, the silence interrupted only by the tolling of the chapel bells, more than 130 survivors as well as former US liberators also took part.

Merkel and French former deportee Clement Quentin placed a wreath of flowers in front of the former crematorium.

Josef Schuster, president of the Central Council of Jews in Germany, said Merkel's presence together with survivors was a "sign of solidarity".

He called for the remembrance of the Holocaust to remain strong, warning that, with time, "distance grows, empathy diminishes" and urged the younger generation to uphold the "responsibility" of never forgetting.

Former inmate Quentin told AFP in an interview recently that when the liberation of Dachau came, he was simply "waiting to die".

"We were no longer normal human beings, we weren't yet animals, but only just", the 94-year-old former resistance member, who lives in western France, said.