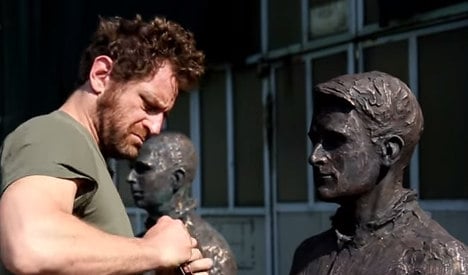 Italian artist Davide Dormino with the statues. Photo: YouTube (screenshot)
The statues of the three men are all standing in line on top of chairs in Berlin's Alexanderplatz, beside one extra empty chair.
The sculptor, Italian artist Davide Dormino, has encouraged people to stand atop the fourth chair to share their own messages to the public in part of a project called "Anything to Say?"
Hundreds of people were gathered at the square on Friday, a day that saw celebrations nationwide for May Day.
Dormino told German paper Deutsche Welle that people were already taking the chance to share their views from the chair.

"[People are saying] many different things. From politics to babbling to silence, from people who desperately are wanting to help Julian, Bradley and Edward to people who have no idea who they are, this chair is, I guess, a place of free speech," he said.
"It doesn't matter what you say. You can say whatever you want, anything you want. Children are even standing up here."
In Germany, the three whistleblowers are seen by some as heros after they shared US intelligence documents.
The statues will not be a permanent feature at the Berlin square, and are set to go on a tour of the world.