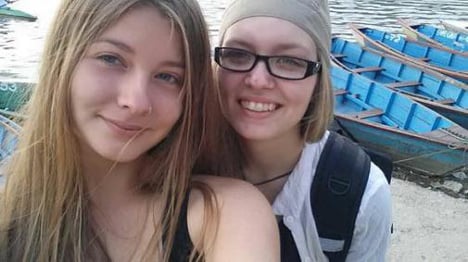 Fears are growing for the safety of the two 20-year-old women, Leonie Elsner and Nina Stechmann from Lehrte in Lower Saxony.

The have not yet been in touch with family or authorities following the disaster, which has so far claimed over 5,500 victims.

"The last time we heard from our daughter was on Thursday," Anja Elsner told the Hannoversche Allgemeine.

Leonie and Nina were in touch by WhatsApp last week to let their parents know their whereabouts.

Mrs Elsner told the newspaper that the app shows Leonie had logged in again on Friday.

“Tomorrow [Friday] we're travelling to the Langtang Valley, won't be reachable for four to five days,” read the message.

The Langtang National Park lies to the north of Kathmandu and is a very popular tourist spot. Hundreds of foreign nationals have already been rescued from it.

Friends since childhood, the two women had met in the Himalayan country after Leonie had spent several months in Australia.

Friends and family have now started a Facebook campaign in the hope of finding them. One German is already confirmed to have fallen victim to the earthquake.

The professor from Göttingen University was on a trip with a group of students, examining ice formations. All 15 students survived the disaster.