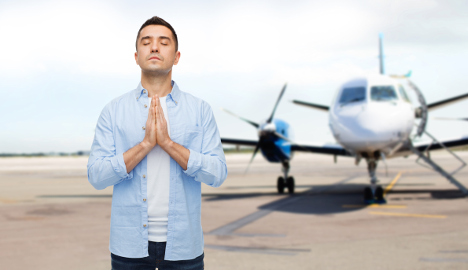 He would approach women in expensive-looking cars as they drove into the short stay car park. If the women looked like they were in a hurry, all the better.

Gradon would then tell them he had missed his flight. Worse still, he had exceeded his weekly limit for his bank card usage. But all was not lost, he had found a cheap flight to London for €32 if they would be kind enough to help him out.

Once he had shown his real passport, the women tended to believe him and offer the money. He would ask for their bank details so that he could send them the amount straight back. Then he would give them a fake email address in case anything went wrong with the transfer.

The women never saw their money again. But by the time they had reported it to the police Gradon was already in another airport, playing the same trick.

According to the Daily Mail the Englishman, who said in court he had lived life as a drifter in Europe for decades, covered 38 international airports with his scam.

But he was finally caught when a 51-year-old woman from Munich reported him to the police.

She had herself fallen for his trick. But when she explained the story to her husband who she was picking up, he immediately suspected she had been tricked and told her to look the name up on the internet.

When she got home she saw Gradon's name come up on the search engine in a series of cases exactly like hers.

The English conman has apparently decided to give up his life of crime.

He will now be deported to England and the Süddeutsche Zeitung reports that he is to go and work for his brother's gardening company.

He's getting too old for his life of crime, he told the court.