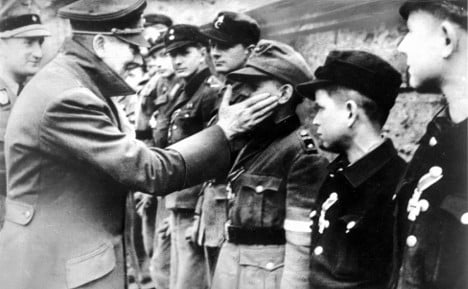 Adolf Hitler speaking to child soldiers in the spring of 1945. Photo: DPA

As both the Western Allies and the Soviet Red Army descended on the capital, Hitler and other prominent Nazis who had been living in the bunker committed suicide.

For him the outcome of the war was less important than expunging the humiliation of 1918, and so in his mind an honourable suicide was a better option than any form of surrender or negotiation.

In 1945 he said "We will not surrender, never. We may be destroyed – but we will drag the world down with us".

Hitler's secretary Traudl Junge gave many interviews about those final days in the bunker, where she typed out Hitler's last will and testament – handing over leadership to Admiral Dönitz – before his suicide.

Hitler and Braun's bodies were taken out to the bombed-out garden behind the Reich Chancellery, where they were placed in a crater and doused with petrol.  The corpses were set on fire as the Red Army shelling continued.

70 years on the site of Hitler's bunker where he and other senior Nazis committed suicide is now a car park with a subtle information board. Even this low-key sign was only installed in 2006, when city planners were worried that people visiting for the World Cup would flock to the site and want to know more.

Interest in the Führerbunker has increased due to the successful film Downfall (2004) that depicted the final few days in the bunker.

Arnd Bauerkämper, Professor of Modern and Contemporary History at Berlin's Free University, told The Local that "the film was overly stylized and dramatized, which takes away from the banality and absurdity of the downfall."

Director Oliver Hirschbiegel's film broke taboos by showing Hitler as a human being, albeit a fanatical and out of touch one, and was criticized for portraying various leading Nazi figures in a positive light in a contrast to Hitler.

Nazi landmarks have traditionally been made forgettable and subdued to avoid neo-Nazis making pilgrimages to the sites.

"The policy started by the GDR government of avoiding having a Hitler memorial at the site of the bunker is definitely a good thing," said Bauerkämper.

Earlier this year, controversy arose around a reconstruction of the Führerbunker planned for a museum in North Rhine Westphalia this summer.

Bauerkämper believes that the policy in the 1950s of depicting Hitler and senior Nazis as the main perpetrators was an attempt to rid the German people of any guilt. He cited the Nuremberg trials as an example of this attempt to place all responsibility onto a select few.

"The some 100,000 Germans and Austrians called to account in all parts of Europe is impressive compared to the two dozen tried at Nuremberg," wrote historian Norbert Frei.

The will to punish perpetrators waned with time because of the Cold War, and many who committed terrible crimes were never prosecuted.

"I think we should put an end to this sniffing out of Nazis. Take my word for it: if we start with that, who knows where it will end," said Chancellor Konrad Adenauer in 1952.

Historian Mary Fulbrook outlines the key historiographical debate regarding the Third Reich from the 1960s onwards:

"On one side of the argument are historians who explain the origins of genocide in Hitler’s intentions, his motives and his own fanatical anti-Semitism. And on the other those who focus more on the way the regime was structured and functioned."

Some historians push the idea of Hitler as a weak dictator, who was pushed along by the structures of the state and the desperation of subordinates to gain his favour.

Bauerkämper argues that: "You can't underestimate Hitler's ideology but you have to ask in which context and under which circumstances was it put in place. Both factors are important."

"There is always more to do in dealing with the past. It has taken a long time and lots of effort to get to the current level of self criticism.

"For example the symbolic kneeling of Willy Brandt in Warsaw in 1970 was highly controversial in Germany, because it clearly acknowledged national guilt." The Holocaust memorial near the Brandenburg gate reflects how Berlin has made a conscious effort to remember the victims, but all crimes have their perpetrators.

The geography of Nazi Berlin is quite hard to fathom because of the divisions of the Berlin Wall, the allied bombing at the end of the war, and some attempts to try and forget. The Topography of Terror is a counter example of this.

Built on the former headquarters of the Gestapo, the Topography of Terror museum documents the Nazi atrocities and attracted over 1.3 visitors million last year, before celebrating its 10 millionth visit in early 2015.

The first ever exhibition specifically about Hitler opened in 2010 at the German Historical Museum. An indication that the topic is far from exhausted is a lecture accompanying the exhibition, entitled "We're far from finished with Hitler".

As the 70th anniversary of the end of the war approaches, few people who lived through those years remain with us. In ten years or so this more direct link to the horrors of Germany's past may well be lost.

One of the most famous of those last survivors may be so-called 'Auschwitz accountant' Oskar Gröning, whose trial for genocide has provoked debate in Germany and worldwide about whether it is finally time to stop the hunt for war criminals to hold to account.

Baurkämper argues that "in legal terms these trials aren't so important, but they carry huge symbolic significance as a critical revisiting of the past."

Back to the start

Meanwhile, Munich will open a museum on the former site of the Nazi party headquarters on Thursday, in a long overdue reckoning with the German city's status as the "home of the movement".

The inauguration coincides with the 70th anniversary of the "liberation" of Munich by US troops at the end of World War II, and of Adolf Hitler's suicide the same day in a Berlin bunker.

Ageing American veterans and Holocaust survivors will join political leaders for a solemn ceremony at the new museum, a modern white cube built among a few surviving neo-classical buildings in what was the Nazis' organisational nerve centre.

Museum director Winfried Nerdinger admitted that it had taken Munich too long to face up to its toxic legacy as the birthplace of Hitler's party, a fact long shrouded in shameful silence.

"Munich had a harder time with this than all the other cities in Germany because it is also more tainted than any other city," said Nerdinger, the son of a local resistance member.

"This is where it all began."

Nerdinger said the aim of the "Documentation Centre for the History of National Socialism" was to address how Munich, which prided itself on its thriving arts scene and convivial beer gardens, could see its civic spirit so perverted.

The four-floor exhibition offers explanatory texts in English and German, and period photographs and videos documenting jackboot marches and the city's utter destruction by Allied bombing.

A chilling video graphic portrays the city's Jewish community as points of light, with more and more extinguished as the deportations to the concentration camps gathered pace.

Nerdinger noted that he intentionally avoided displays full of crisp brown uniforms and giant swastika flags, saying he had no desire to showcase the Nazi "aesthetic".

Instead, visitors find artifacts such as hand-scrawled sonnets found in the pocket of resistance member Albrecht Haushofer, who was executed just before the war's end. Blood still stains the paper.

By Matty Edwards, with AFP