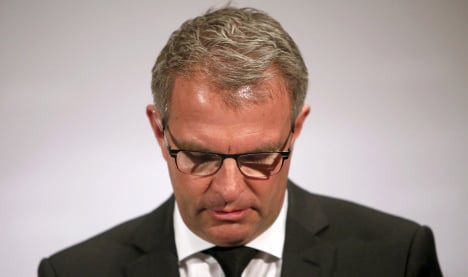 "This tragedy has changed us and the scars that it has left on our company will remain forever," chief executive Carsten Spohr told some 2,000 shareholders at the meeting in Hamburg.

Germanwings is the low-cost subsidiary of Lufthansa and one of its jets crashed into the French Alps on March 24 – apparently in a deliberate act by the co-pilot – killing all 150 people on board.

"The entire Lufthansa family is in mourning," said supervisory board chief Wolfgang Mayrhuber who formally opened the annual general meeting with the minute's silence.

A book of condolence lay open for shareholders to sign in the huge congress centre where the meeting was being held.

Spohr said Lufthansa would "stand by… and support" the families and friends of the people who died.

"We consider this not only our obligation, but also a deep need," he said.

And he vowed that Lufthansa "will continue to gradually expand our leading position in the area of flight safety, by continuing to develop our safety structures".

"And even if we all feel the need to step back and take a break after this terrible tragedy, an aviation group or airline cannot stop — not for weeks, not for days and not even for hours. We must and we will continue," Spohr said.

The CEO was likely to face tough questions about the company's strategy, financial results and the performance of its shares on the stock market, as well as the state of the investigation into the crash itself.

Shareholders are concerned about Lufthansa's poor financial performance and management's decision to waive dividend payments and about how management plans to tackle cut-throat competition in the sector, not only from the German group's European rivals, but also from carriers from the Gulf region and budget airlines.