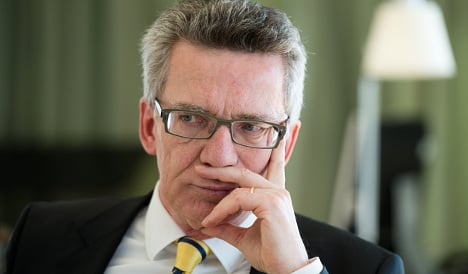 Interior Minister Thomas de Maizière has some explaining to do. Photo: DPA

“We have no knowledge of alleged economic espionage by the NSA or other US agencies in other countries,” the Interior Ministry wrote to the Bundestag on April 14th in response to a question from the opposition Linke (Left Party).

Statements of this kind are signed off by the whole government.

But it emerged last week that Germany's foreign intelligence agency, the Bundesnachrichtendienst (BND) had been spying on German and European companies on behalf of the NSA.

Further, officials at the Chancellery, which is responsible for overseeing the BND, knew about the economic espionage and did nothing.

The Chancellery knew as early as 2010 that the NSA had asked the BND to target firms including arms companies EADS and Eurocopter, both since merged into Airbus.

The NSA provided the BND with email addresses, phone numbers and other 'selectors' (identifying information) belonging to the company's employees and asked the Germans to monitor their communications.

A press release from the government last week said that the Chancellery was “now checking whether parliamentary answers in this case remain totally valid”.

“We aren't calling for anyone to resign,” he said, “but it seems that questions were indeed answered wrongly. This seems to have been going on for a long time at the BND and we need to find out who's responsible.”

Von Notz added that while Germany shouldn't hold back from co-operating with its allies, such as the US and UK, in intelligence gathering, that work had to be within the rule of law.

“There's a discussion in the USA right now about whether the NSA has overstepped its boundaries and should be brought under control, the same discusison that's happening here.

“There's a lot to be said for co-operating when you're allies, but that has to be within legal limits… these are unacceptable conditions for allies, and the fact that the federal government has obfuscated them is worrying.”

He wouldn't believe “one more word” from the government relating to spying, he said.

The latest twist in the scandal puts Interior Minister Thomas de Maizière under pressure, as he was head of the Chancellery from 2005-09 and ultimately responsible for supervising the spies.

Mass-circulation tabloid Bild singled de Maizière out for a broadside on Wednesday, saying that he was “lying in black and white” and illustrating the story with a picture of the minister with Pinnochio's long nose. The Interior Minister has already come under pressure over allegations that the Defence Ministry hushed up accuracy problems with the army's G36 rifles while he was in charge.

De Maizière denied on Wednesday that he had lied to the Bundestag, but claimed that the highly-classified nature of the subject meant he couldn't speak openly in his own defence.

“I would gladly face up to my responsibilities and contribute to explaining the case,” he said, but “I am not in a position to speak about these allegations or questions in public.”

“I regret that, because it would also be in my interest to lay the matter to rest.”