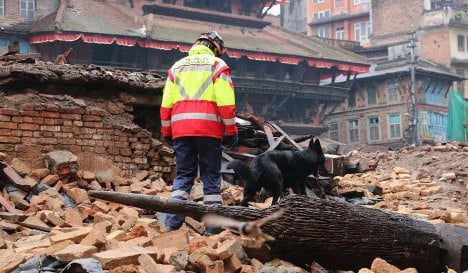 The 52-strong team from ISAR Germany, an organisation specialised in international search and rescue operations, arrived in Nepal on Tuesday evening.

They are travelling to the district of Gurkha, 70 kilometres north east of the capital Kathmandhu, a spokesperson told The Local.

The journey is expected to take several hours as the roads are badly damaged and full of people searching for aid.

“The group of volunteers have two principal tasks. Search and rescue is performed by specialists in locating and extracting people still buried in debris. And then there are doctors and nurses to care for the people we save and other injured people,” the spokesperson explained.

“The chance that there are still people alive under the rubble exists. But it is getting smaller every day.”

The team were sent to Gurkha under orders from the UN, which is coordinating the rescue efforts.

The town was particularly badly affected, as it lies only seven kilometres from the earthquakes epicentre.

Search dogs and high-tech equipment will be used by the ISAR Germany team to look for survivors buried under snow or rubble in a mission which is set to last between 10 and 12 days.

“We are happy that we can finally help the people who are in need,” said group leader Thomas Laackmann.

“We are entering the operation well prepared. In the past few days the situation has been made clear with our partner organizations and the arrival of our team has been prepared for.”

Among the team are doctors, nurses, dog specialists and burial specialists.

On Wednesday a German plane carrying 60 tonnes of aid, including water, tents and blankets arrived in the stricken country.

Tensions have risen among survivors due to the slow pace at which aid has arrived.

Skirmishes are reported to have broken out over water supplies, according to AFP.

The death toll is currently estimated at over 5,500, but Nepalese prime minister Sushil Koirala warned on Tuesday it could rise to over 10,000.

Donations can be made to the volunteer-based organisation via their website: www.isar-germany.de

SEE ALSO: At least one German confirmed dead in Nepal