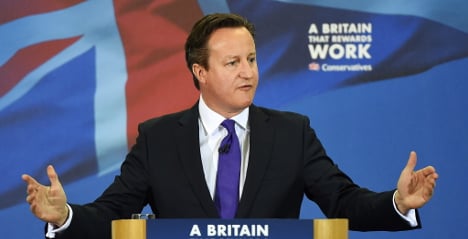 Since the elections in Greece and the financial crisis reaching crunch point, the spectre of a “Grexit” – the possibility that Greece could bail out of the Eurozone – is once again floating around.

For years, everything possible and impossible, legal and questionable has been done to keep Greece in the EU, because otherwise “Europe will have failed”.

But what about Great Britain, which has been toying with the idea of a life outside the EU for much longer?

Few people among the German public or in German politics worry about a possible “Brexit” – a British departure from the EU altogether. But the danger is real, and the consequences would massively outweigh those of a Grexit.

Making up 15 percent of the EU's GDP, Great Britain doesn't just pip France to the post as the Union's second-largest economy. Within 30 years, the British GDP may overtake Germany's – in part thanks to demographic trends. Greece's share of the EU's GDP, by contrast, is only 1.3 percent. Even more important from a German perspective would be the shifting balance of power in the Council of Ministers – where Europe's heads of state and government meet to discuss EU policy – in the event of a British exit.

Until now, representatives of pro-free market countries have been evenly matched with those of protectionist and interventionist nations. Each camp can amass a little more than 35 percent of the votes needed to issue a qualified veto (the other governments are 'swing voters' on economic policy).

Germany would lose an important ally in Great Britain. And it would be mostly German taxpayers who would replace the second-largest net contributor to the EU budget.

The British will elect a new government on May 7th. Prime Minister David Cameron, leader of the conservative Tories, promised in January 2013 to hold a referendum on whether the British should stay in the EU by the end of 2017 if he is re-elected. Current polling suggests that the result of such a referendum would be completely unpredictable.

Whether it's Grexit or Brexit, any departure would entail economic shifts. In the long term, uncertain possibilities for political self-determination would open up: the Greeks could devalue their currency; the British could get rid of onerous regulations.

The eurozone would get stronger in the long term without Greece, while the EU without Britain would certainly get weaker.

The fact that the potential Grexit nevertheless draws so much more attention and pressure to act must be because of a distorted perspective. In the case of Greece, it seems that the decision is getting closer every day. But a British departure seems an unlikely, far-off prospect to the public and to political decision-makers.

But this scenario isn't so unlikely or far away. Cameron himself wants to fight to remain in the EU, but only if there are comprehensive reforms. If, on the other hand, Labour leader Ed Miliband wins the election on May 7th and becomes prime minister, there would be calm on the Brexit front for at least five years, since Labour will shy away from a referendum as long as there are no EU treaty changes.

But the calm won't last. If the Tories are forced into opposition, you can count on them becoming dominated by Eurosceptics. Public opinion is notoriously critical of the EU in the country. The Tories could win the next election with an anti-EU campaign. In the best case, the referendum would only be put off.

Out in the cold?

Despite the emotions running high, we can assume that the British – like the Scots in 2014, when they voted on independence – will weigh the economic possibilities and risks reasonably. Think-tank Open Europe London worked these out for several different Brexit scenarios.

The decisive factor will be the access the British can negotiate to the EU's internal market.

In the best case (access to the internal market and far-reaching market opening and deregulation on their own part), Brexit could increase British GDP by 1.6 percent by 2030. And in the worst case (economic isolation of Great Britain), it would shrink the economy by 2.2 percent. More realistic scenarios suggest a narrower range of 0.8 percent shrinkage to 0.6 percent growth. While an exit from the EU would be fraught with huge problems and uncertainties, in purely economic terms it wouldn't be the end of the world.

To prosper outside the EU, the British government would have to adopt a radically liberal policy. An economic bust could only be avoided with completely open free trade, even less regulation and a liberal immigration policy for workers.

But many conservative-nationalist supporters of a Brexit would reject this, just as Labour supporters would.

The UK should lead positive change

Frankly, the best scenario would be for Great Britain to remain a member of a reformed EU, which would develop as a competitive economic area, removing regulatory handicaps, pushing forward the internal market for services, digital networks and energy, and opening itself to global free trade.

Such an EU would also have to reduce its democratic deficit, involving national parliaments more closely. That's not just Cameron's agenda, but can also be found almost word-for-word in the manifestos of his Labour and Liberal-Democratic opponents. All this could be a reform agenda for the EU, not just in the British interest, but in the German and the whole European interest, too.

For Greece, we have been and remain ready not just to pay out huge amounts of taxpayers' money in the name of solidarity, but also to bend the rules. But when Great Britain now wants to re-examine the balance of powers in the EU in the name of subsidiarity, it's called outrageously “un-European” in Brussels.

Whether the Greek government's behaviour is “European” in this sense is debatable. One could call it blackmail. Giving in further to Greek demands would mean further damaging the important principle of responsibility and weakening the currency union.

Co-operation with many of the British demands, on the other hand, wouldn't weaken the EU but make it stronger, more competitive and more democratic.

Michael Wohlgemuth is professor of economics and director of the think-tank Open Europe Berlin. This article originally appeared in print in the Frankfurter Allgemeine Zeitung.