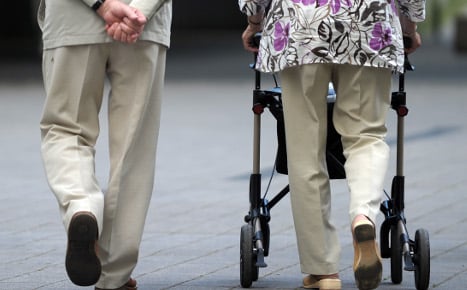 “In the long term, a decline in Germany's population is inevitable,” Destatis said in a statement. “The positive balance of immigration into and emigration from Germany cannot close this gap for good.”

As the number of deaths exceeds the number of births, Germany is expected to see a major decline in population that could drop to 73.1 million or even as low as 67.6 million by 2060 – 13.2 million less than the 2013 census count of 80.8 million.

Statistics office president Roderich Egeler said at a press conference that in the near future the population could increase over five to seven years depending on immigration, but it would then start to shrink afterwards.

The office emphasized that the projections were “not forecasts.”

“They provide 'if-then statements' and show how the population and its structure would change based on certain assumptions,” the statistics office wrote.

The projections were based on assumptions that birth rate remained as it is now, that the average age at birth would continue to rise and that life expectancy would also increase.

Germany has one of the lowest birthrates in Europe, with about 1.4 live births per woman, according to the most recent data from 2012. The so-called ‘replacement level’ of maintaining a stable population size is 2.1.

The German statistics office also predicted that the working-age population “will shrink tremendously.”

The number of people aged between 20 and 64 in 2013 totalled 49 million, but the office stated that this demographic size could start to fall in 2020, reaching a low of between 34 million and 38 million people – a reduction of up to 30 percent.

Politicians and think-tanks have emphasized Germany’s need for more immigrants to maintain its workforce as the baby-boomer generation finally hit the end of their working lives.

The youth population is also expected to decline, while the senior population will grow. The number of people younger than 20 is predicted to decrease from the current 15 million to between 11 million and 12 million.

Those 65 and over will increase over the next two decades as baby-boomers reach retirement age. In 2060, the senior population will reach about 23 million, going from currently one in five Germans aged 65 and over to one in three in 2060.