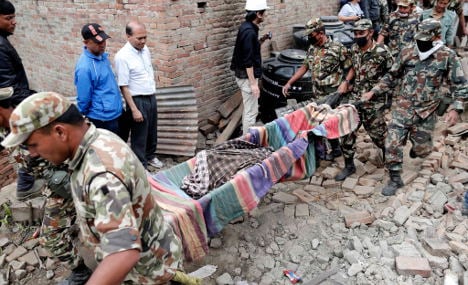 Search and rescue efforts are ongoing in Nepal. Photo:DPA

The spokesperson also said that they “could not rule out” other Germans being confirmed among the dead.

German media is reporting that the victim is Matthias Kuhler, a professor at the Göttinger Georg-August University. Kuhler was on a trip with a group of students, all of whom are reported to have survived the disaster.

Zeit Online reports that there are still around 150 German citizens in Nepal who are unaccounted for.

The spokesperson said that the government is doing all it can to locate the missing individuals and to help Germans seeking assistance to leave the country.

The German government is planning to send a cargo plane loaded with 60 tonnes of emergency assistance materials to the stricken country.

Included in the cargo are tents, blankets, cooking sets and water canisters.

The plane was supposed to depart on Monday evening but has been delayed because Indian authorities have until now refused it permission to cross their airspace, saying the airspace is too full.

The crew hope to depart later on Tuesday.

Their experience has been matched by that of other European rescue teams, including a planeload of Swedes.