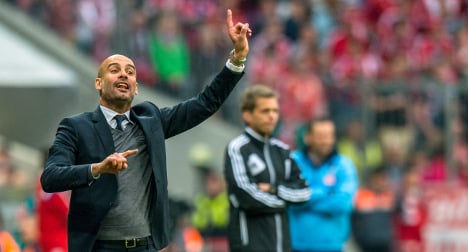 Bayern coach Pep Guardiola on the sidelines against Hertha on Saturday. Photo: DPA

It is now mathematically impossible for Wolfsburg to make up the 15 point gap that separates them from top-placed Bayern.

Although the way they became champions could have been more exciting, Bayern chairman Karl-Heinz Rummenigge said that it was “brilliant” to have defended the title.

The team and coach Pep Guardiola had “done a fantastic job in the first year after the World Cup where so many of our players were on the field.”

Captain Philip Lahm and his team hadn't even organized a viewing party for the Gladbach-Wolfsburg match, meaning that news of their 25th Bundesliga win came as something of a surprise – and maybe even with a little bit of disappointment.

“It's better to become champions in the stadium. It's hard to celebrate on the couch,” Lahm had already said before the game.

Guardiola, meanwhile, had been bullish about Bayern's prospects, saying that “we're already the champions” on Saturday evening after Bayern beat Hertha Berlin 1-0 at home.

The coach said that Bastian Schweinsteiger had secured the league title with his winning goal, while Hertha trainer Pal Dardai congratulated his opponents immediately on their anticipated victory as well.

But the Munich team can't rest on their laureals. They have two semi-final matches to prepare for, one for the German Cup against rivals Borussia Dortmund (BVB) this Tuesday, followed by a Champions League semi against FC Barcelona the following week.

“We can't celebrate anyway. We can't let things slide – we've got another important game on Tuesday,” forward Thomas Müller said of the upcoming faceoff against BVB.