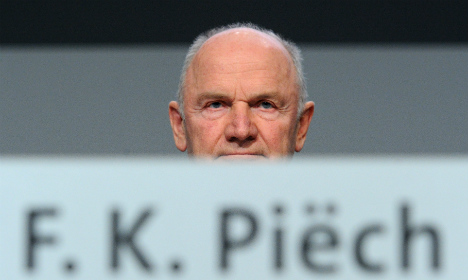 The news came two days after Piëch rejected media reports that he was plotting to oust the carmaker's chief executive, Martin Winterkorn.

Vienna-born Piëch gave up all his positions in the group with immediate effect, as did his wife Ursula Piëch, a member of the board since 2012.

He will be provisionally replaced by deputy chairman of the supervisory board Berthold Huber, according to the company statement.

Piëch, a major figure in the German business world and grandson of Ferdinand Porsche, founder of the Porsche car company, had been president of VW's supervisory board since 2002.

Volkswagen had attempted last week to draw a line under a bitter power struggle between its chief executive and supervisory board chief, saying it would extend Winterkorn's contract as chief executive.

According to German public broadcaster NDR, even after this decision 78-year-old Piëch was plotting to have 67-year-old Winterkorn replaced.

According to NDR, Piëch was trying to drum up a majority on the supervisory board to have the CEO removed from his post.

In a statement, influential members of the supervisory body said Saturday that "in view of the past weeks, the mutual trust necessary for good collaboration was no longer present."