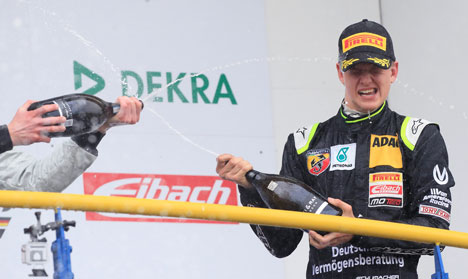 Schumacher Jr is too young to drink any of that champagne. Photo: DPA

The 16-year-old son of seven-time world champion Michael Schumacher celebrated by spraying a bottle of champagne he is still too young to drink after winning the trophy.

Schumacher Jr has more chances to prove his skills as the F4 season kicks off this weekend at Oschersleben, between Hanover and Berlin, with another two races to follow on Sunday.

"Of course, I am happy that I was able to catch up, but it didn't even cross my mind that I was the best rookie," said Schumacher Jr at the start of the season, which runs until October.

"After yesterday's qualifying and my start position, I am really happy."

Schumacher will start 20th on the grid for Sunday's second race and then in the first row for the third and final race at 1520 when the order is reversed.

After a successful karting career, Schumacher Jnr has signed for Dutch Van Amersfoort Racing team in Europe's ADAC Formula Four for the season.

With Michael Schumacher still recovering from a serious head injury suffered during a skiing accident in December 2013, his father Rolf Schumacher was at the Oschersleben to watch his grandson race.