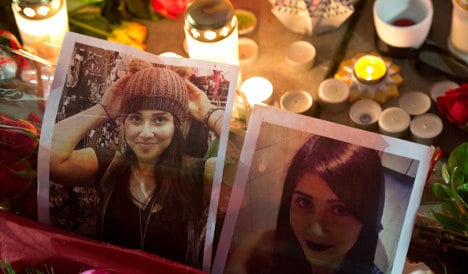 “I am so incredibly sorry,” said the accused, Sanel M., at the start of the trial, speaking through tears.

“I can't image what pain and suffering I have caused the family,” Die Welt reported him as saying.

The prosecutors at the trial in Darmstadt in Hesse say Sanel M., fatally struck Albayrak after she tried to intervene in an argument between Sanel and his two friends and two women on November 15.

Sanel M., who has been in custody since the middle of November, is facing a charge of grievous bodily harm resulting in death.

The prosecution plans to call around 60 witnesses and two experts in the course of the trial.

But experts say that Sanel may get away without a jail sentence.

The minimum sentence for adults for grievous bodily harm resulting in death is three years in jail, reports the Rheinische Post.

But Sanel M. who was celebrating his 18th birthday on the night of the incident, will likely be tried as a juvenile, meaning that despite previous convictions for theft, robbery and grievous bodily harm, he could only face a probation period. Albayrak fell into a coma after being struck to the ground in the attack that was caught on surveillance camera and later published in the national media.

A few minutes before the incident she had stepped in as Sanel M. and two friends threatened two teenage girls in the fast food restaurant's toilets.

Although she successfully calmed the situation down, the men caught up with her and attacked her as she left the restaurant and was walking through the car park.

Her family made the decision to switch of her life-support machine on her 23rd birthday, sparking a wave of sympathy across the country.

Albrayak's courage sparked national soul searching, as Germans contemplated the rarity of her bravery in modern society. Her ethnicity, she is of Turkish origin, has also been a theme, as she is seen as an exemplar of how modern multi-cultural Germany can rally around shared values.

On Twitter Ralf Müller says "It's irrelevant how the trial turns out. Tugce is a hero who stands for the coexistence we in Frankfurt/Offenbach [Hesse] are proud of."