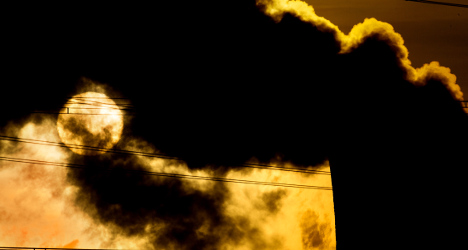 The sun rises behind a coal-burning power station in Lower Saxony. Photo: DPA

The statistics have been published by the ministry in response to an inquiry launched by the Green Party.

The government sets legal limits for different contributing factors to pollution, like the amount of dust particles, nitrogen dioxide, and sulphur dioxide in the air.

But the latest report shows that these limits are often exceeded all over the country.

"It's frightening in how many places the limits are being exceeded", said Green politician Bärbel Höhn.

Stuttgart is the worst city in Germany for dust particles and nitrogen dioxide in the air, with Hamburg the worst place for sulphur dioxide pollution.

The main cause of high concentration of dust particles in the air is traffic, particularly vehicles run on diesel. It is perhaps no surprise then that Stuttgart, as German's most congested city, comes top of the pile.

Dust particles can damage mucus membranes in the nasal passage and blood vessels in the lungs, which can increase the risk of lung cancer.

According to a study by the European Environmental Agency, dust particles cause 430,000 premature deaths in the EU per year.

The report also included figures on levels of nitrogen dioxide, usually a by-product of burning and especially present in fumes from vehicles with diesel engines.

Nitrogen dioxide can be harmful to asthma sufferers, and high concentrations can increase the risk of a heart attack.

One silver lining is that, unlike dust particle concentration and nitrogen dioxide levels, the amount of sulphur dioxide in the air hasn’t exceeded legal limits anywhere in Germany.

Sulphur dioxide is produced by burning coal and oil, and can cause acid rain. The SO2 levels have gone down in the last 20 years, and so the health of Germans isn’t at risk.

German cities with the highest levels are mostly in Saxony, a former GDR industrial heartland before reunification.