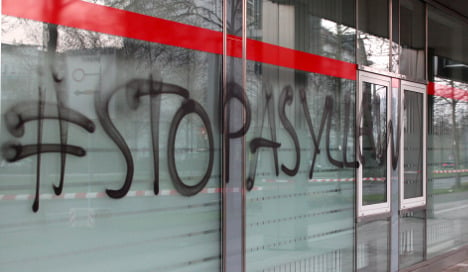 Police said around 10 hooded people gathered in front of the Technisches Rathaus, which hosts a number of city administration offices.

They threw stones, smashed window panes and threw paint packets against the building.

Investigators believe that the attack was politically motivated based on a claim of responsibility posted to a far-left website.

“Immigration offices manage the racist policies of inclusion and exclusion in Germany,” the authors wrote.

“They implement the divisive policies against people decided on by German governments, which are being worsened at the moment.”

The authors sign off with the English phrase “no border-no nation” after saying that Germany and the EU should rethink migration policy “from the ground up”.

City mayor Burkhard Jung said that the people behind the attack were vandals who wanted to force their opinions on the whole city using violence.

In January a hundreds-strong mob of "anti-fascists" rampaged through the city centre, smashing shops, government buildings and police cars before being stopped by riot police.