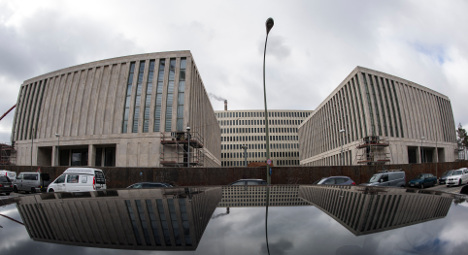 The headquarters of the Bundesnachrichtendienst (foreign intelligence service) in Berlin. Photo: DPA

Die Zeit reported that the NSA asked for a total of 800,000 people to be targeted for surveillance.

The BND simply plugged the personal details into their own systems and carried out the intimate surveillance on behalf of their American allies.

BND officers had noticed several times since 2008 that some of the selectors directly contradicted the rules on how the agency is supposed to work, and its co-operation agreement for the “War on Terror” Germany signed with the USA in 2002.

The Americans reportedly asked for information on arms manufacturer EADS, the Eurocopter helicopter company and the French government.

But this was not seen by their superiors as a reason to regularly check the lists of selectors for irregularities.

It was only after leaks by NSA whistleblower Edward Snowden began in summer 2013, revealing the extent of the surveillance by the American spies against the entire world's communications, that the BND began checking in detail.

By October 2013, they had discovered that around 2,000 of the selectors were definitely targeted at western Europe and even Germany.

Politicians were among the people picked out for the illegal spying.

But the true extent of the scandal wasn't revealed until the Bundestag's (German parliament) NSA Inquiry Committee submitted a request for evidence to the BND.

A fresh check of the selectors supplied by the NSA showed that 40,000 of them identified western European and German targets.

Chancellor Angela Merkel's office, to which the BND is directly responsible, was not informed about the spying on friendly targets until after that parliamentary question was asked, in March 2015.

BND director Gerhard Schindler was excluded from the meeting and may be asked to retire.