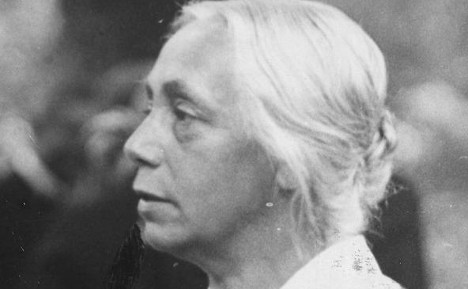 Until her death on April 22nd 1945, Käthe Kollwitz persevered through the most eventful, and perhaps painful, period of German's history. Themes of womanhood, poverty, and dehumanisation became central to her art.

Devoid of colour, her eerie sketches, prints and etchings are often dark and mysterious conveying doubt, confusion and anguish.

She produced an enormous number of self portraits and constantly explored the loss of her son, meaning her work was deeply personal and yet she captured things that are totally universal, like motherhood, the effects of war, and family.

Director of the Käthe Kollwitz Museum Dr. Iris Berndt spoke to The Local about the artist.

“She is an outstanding German artist, particularly as a woman in a male dominated world, because she stands for honesty and creating your own path,” she said

In 1919 Kollwitz became the first woman ever to be admitted to the Prussian Academy of Arts.

“She is the standard when it comes to selflessness and furthering the cause of the weak and the vulnerable,” Dr. Berndt continued.

She admires above all “the courage to speak out and take a stand on the most important questions of the day”, which she would like to see from more often contemporary artists.

Dr. Berndt also spoke about how well known Kollwitz is: “Half of the museum's visitors come from abroad, and I get the feeling she is more recognized outside Germany, and is seen by non-Germans as the defining female German artist,” she said.

Born Käthe Schmidt just before German reunification in Konigsberg (now Kaliningrad), Eastern Prussia in 1867, she grew up in a politically radical family, and was influenced by religion and socialism.

After showing great talent for drawing as a child, she enrolled at an art school for women in Berlin at the age of 16.

She married Karl Kollwitz, a doctor who helped the poor in Berlin, and they lived there together until their house was destroyed during the Second World War.

Her husband’s line of work influenced her early artistic exploration. She found bourgeois life unappealing and uninteresting, but thought the proletariat “had guts”.

After spending more time with patients of her husband she was “powerfully moved by the fate of the proletariat and everything connected with its way of life.” At the turn of the century Berlin was the most densely populated city in Europe, and the misery of industrialization and poor working conditions would influence her art.

Kollwitz's first major cycle of works was inspired by Gerhart Hauptmann's play The Weavers, a dramatisation of the failed revolt of the Silesian weavers in 1842.

Because her art often dealt with the poor and personal grief, she is often described as an “Elendskünstlerin” (artist of suffering), but Dr. Berndt argues this description was just used to dismiss her work because of its critical dimension.

In 1903 Kollwitz became a member of the Berlin Secession, an association of artists as an alternative to the state-run Association of Berlin Artists.

She achieved further success with another cycle of work called Peasant War, based on the 16th century uprising.  Here she showed her great talent as an etcher, but then went to study sculpting in Paris.

She described her life before 1914 as “a happy time”, but everything changed when her son Peter was killed just ten days after volunteering for the army. Her terrible grief was mixed with a sense of guilt for not stopping him from joining up.

This tragedy would go on to dominate much of her art in later life. As well as the exploration of her personal loss of a son, she became an outspoken pacifist during the war, drawing many anti-war posters.

The face of Ernst Barlach's Angel, Germany's most famous sculpture remembering the First World War, is modelled on Käthe Kollwitz, in a tribute to her pacifism and the brilliant link she established between a mother's responsibility to protect her children and the duty of nation to protect its people. As a committed socialist, she also produced tributes to Karl Liebknecht after he was killed during the Spartacist Uprising in 1919.

In 1933 she was ejected from the Prussian Academy of Arts by the Nazis and banned from exhibiting her work.

She struggled during the Nazi period for money and because of the ban on exhibiting her work, but she nonetheless created a number of sculptures that later became perhaps her most famous pieces.

She once said that if she could have lived her life again she would have been a sculptor and nothing else. After he house was destroyed during the Second World War, she moved out of the capital and died near Dresden on April 22nd 1945.

Today her lasting impression on Berlin is considerable. One of her most famous sculptures “Mother with her dead son” was chosen for Germany's Central Memorial for the Victims of War and Dictatorship in 1993 by Helmut Kohl.

The memorial can be found at the Neue Wache (New Guardhouse) on Unter den Linden right in the centre of the capital.

Dr. Berndt sees it as a “good opportunity” for Käthe Kollwitz but was less positive about the implication that “lumping everything together perhaps suggests that nobody is responsible”.

Today the Käthe Kollwitz Museum is located just off the Kurfürstendamm, a huge shopping street in West Berlin. Set up in 1986 before the fall of the Iron Curtain, this area was the centre of West Berlin.

Kollwitz lived in Prenzlauer Berg in former East Berlin – and a square and a street there both bear her name – but was also connected to the area where the museum stands today, such as the Berlin Secession and her main studio.

And Dr. Berndt argues that her importance can't be restricted to one district of the city.

“She wasn’t just an artist for Prenzlauer Berg, but for the whole of Berlin,” she said

To mark the 70th anniversary of her death, there was a service at her grave in Friedrichsfelde cemetery, as well as special multimedia event at the museum.