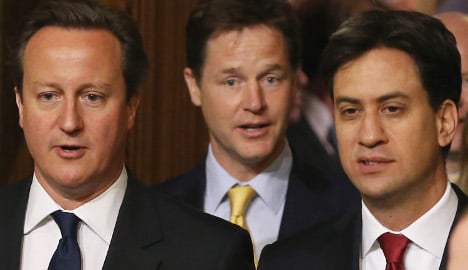 On May 7th, millions of people will head to the polls in the UK General Election.

But for various reasons, a large proportion of the 5.5 million UK expats living abroad will not be casting their vote this year, The Local learns.

In some cases, expats said they felt the vote did not concern them and their lives as they were no longer living in the UK.

Simon Kilby, a British citizen who has been living in Vienna for the past six years told The Local: “I will not be voting, I see no point as I am living in another country.”

Germany-based expat Adrian Robinson said: “I am no longer resident in the UK, and do not pay tax there. For me the government (regardless of politics) are no longer interested in me as a citizen.”

Like Kilby, Robinson said that he nevertheless took an active interest in the local politics in his adopted country because it has an impact on him.

"I am a British citizen and live in Italy but won’t be voting either here or there. No party has policies for me. They are all liars who just fill their own pockets! And cover up everything!"

For David Thompson in France, his decision not to vote was less complicated. “No, too much hassle. Besides I've not got any faith in anyone to vote for!"

But not all expats were singing the same tune, with some saying the UK elections were relevant to British citizens living abroad.

“As a British citizen living in the EU this election affects me as a large part of the electoral debate at the moment is focused on Britain's position within the EU, with potential referendums," Dan Purchase, an Austria-based Briton told The Local.

"I consider Austria my home and I have no plans to leave but I feel it would be dangerous to sever my ties to the UK," he added. "If the UK voted to leave the EU, they would obviously want to be part of the EEA which would allow a continuation of the free movement of people we currently see. But there is no guarantee that the EU would agree to this – especially in the animosity of a 'break-up'."

British expat Michele Fowler told The Local Spain that she is registered and will vote by proxy, a system which she describes as “more reliable than a postal vote, which doesn’t really give sufficient time if there is a delay on delivery."

Of course, not all Britons are eligible to vote due to the so-called ’15-year rule’ that prevents expats who have lived abroad for more than 15 years from voting in UK elections.

"After serving for 17 years in British government service abroad, we lose our right to vote after 15 years," Roger Owen told The Local. "Now there's gratitude."

Speaking to The Local previously, voting rights campaigner Harry Schindler, who has been living in Italy for nearly 30 years, said: “There’s no question that we’ve loosened our ties to the country.

“We have family and friends in the UK, we go backwards and forwards. I can get to London quicker by plane than an MP can from [the English city] Carlisle.”

Other Britons contacted by The Local were not even aware that they could vote in the UK elections with several requesting information.

"I am a British citizen, cannot vote here and was not aware I could still vote in the UK," said Italy-based expat Simon Carey.

Currently, as few as 20,000 people – a tiny fraction of the 5.5 million eligible expats – are signed up to vote in UK elections, according to the Electoral Commission.

With this in mind, the UK Electoral Commission has launched a recruitment drive to get some 100,000 Brits to join the voting register by April 20th, the registration deadline.

So if you’re one of the number who want to vote from abroad but simply don’t know how then here are some guidelines:

Since the elections last May, all UK expats can now register to vote online, making the process a whole lot simpler.

You just have to complete the registration form online here.

But bear in mind that to be eligible to vote you must have been registered in a UK constituency within the last 15 years.

If you were too young when you left the UK to have been registered then you can still register as an overseas voter if your parents (or guardians) were registered in the UK in the last 15 years.

There are three ways you can vote from overseas: by proxy (you designate someone you trust to vote on your behalf in the UK), by post or in person.

If you want to vote by post, make sure you check that you will have sufficient time to receive and return your postal ballot pack. Postal votes will usually be dispatched a few weeks before polling day. For your postal vote to count, it needs to be received back by the Returning Officer by 10pm on May 7th 2015. If you live a very long way away it may be that a proxy vote would provide a good alternative.

For more information about the 2015 general election click here.