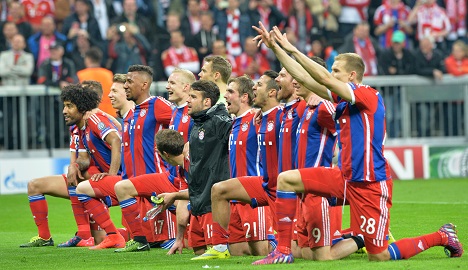 Bayern had never overhauled a two goal deficit from the first leg in a Champions League tie, but in what turned out to be a joyous evening at the Allianz Arena for the home fans, this is exactly what they did, and with ease.

Goals from Thiago Alcantara, Jerome Boateng, Robert Lewandowski (2), Thomas Müller and Xabi Alonso came in a masterclass in how to seize control of a match and pass the opponents to death.

“We are 100% optimistic,” Bayern coach Pep Guardiola had said before the match.

Fans realized the importance of a good start and created a terrific atmosphere for the home team. An entire stand was covered by the message “Niemals Aufgeben” (never give up).

The first goal was absolutely crucial, and Guardiola’s men started like a team on a mission and played at a lighting fast tempo.

Philip Lahm showed his versatility by playing on the right wing, a result of the injury crisis that has caused the resignation of the long-serving club doctor, but the German champions didn’t miss stars like Franck Ribery, Arjen Robben and Bastian Schweinsteiger on this occasion.

Robert Lewandoswki was inches away from getting them off to the perfect start when he hit the post after 9 minutes, but the fans didn’t have to wait long as Thiago nodded in a near post cross from left-back Bernat in the 13th minute. Suddenly Porto were the ones under pressure.

In the first match Porto tactically out thought Bayern by pressing them high up the pitch to disrupt their patient build up play and forcing them into giving the ball away in their own half, but in the second leg they couldn’t handle wave after wave of Bayern attacks.

Boateng headed in Bayern’s second from a corner in the 21st minute. Suddenly they were ahead in the tie and had only to avoid conceding to go through.

But they didn’t sit back and protect their lead. Before long Lewandowski finished off a magical team move to make it 3-0. A first time volleyed cross was flicked on by Müller and headed home by the Polish striker. By this point the stadium was bouncing, and a cruel deflection off a Porto defender made it 4-0.

This really crushed the Portugese team's spirit and Bayern then killed the game completely when Lewandowski made it 5-0 with a terrific low shot into the bottom corner.

Absolutely relentless from the off, FCB won the ball high up the pitch, didn’t give their opponents an inch and the Portuguese side simply crumbled under the pressure.

As the half time whistle went and the Porto players drudged towards the dressing room with the tie all but over, the jubilant commentator described what he had just seen as an “unbelievable match, a Bavarian football festival”.

Indeed it was one of the most one-sided halves of football you will see, not dissimilar to the pasting handed out by Germany in the world cup semi-final against Brazil last summer. The second half more closely resembled a realistic Champions League quarter final with FC Bayern still the better team, but Porto no longer leaking goals like a broken tap.

Porto even got one back with a well worked moved finished off by striker Martinez 20 minutes from the end, which woke the Portuguese side up, as they started to show the kind of attacking promise seen in the first leg.

But Porto’s Marcano was sent off for a second bookable offense and Xabi Alonso nonchalantly curled home the resulting free kick two minutes from time to kill off any notion of a Porto comeback.

The final whistle was welcomed with a mix of relief and celebration as the German giants sailed through to the next round.