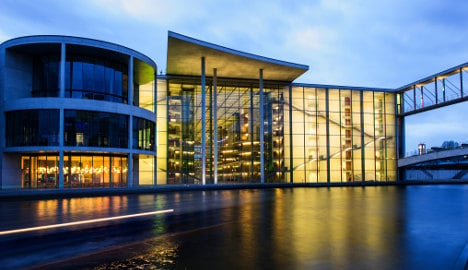 The Paul-Löbe Haus, where much parliamentary work is carried out. Photo: DPA.

Police are investigating yet another arson attack against a Bundestag building after someone hurled a Molotov cocktail against the glass facade of the Paul-Löbe Haus, where members of the parliament have offices, newspaper Berliner Zeitung reported.

The fire caused only slight damage and appeared to have charred the sidewalk, according to the newspaper.

Leaflets were found at the scene, suggesting the attacker had right-wing affiliations. Police told the Berliner Zeitung that an officer had seen a bicyclist fleeing the scene.

A similar attack on March 23rd against the building also left no major damage or injuries.

On November 24th of last year, a Molotov cocktail was also set alight and throw against the same building.

After that attack, leaflets from a group calling itself the “German Resistance Movement” were found on the scene, warning of Germany's “shattering” and “balkanization” if it were to continue down the path of a “multicultural, multiethnic, multireligious and multi-historical” population.

There were also attacks on the Reichstag on September 28th and on the Christian Democratic Union (CDU) party headquarters on August 25th.

Police said at the time that there were clues indicating far-right political motivations for these attacks.