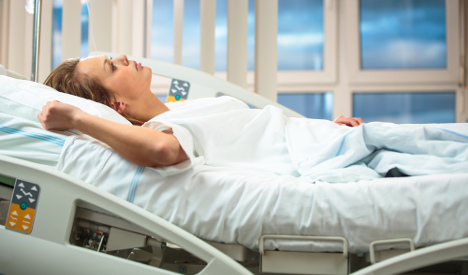 Photo of patient in a hospital bed: Shutterstock

Many British people in other EU countries return to the UK for routine doctors’ visits, and many fail to register with a local doctor in their new country, particularly in the early stages following a move abroad.

In some countries, bureaucracy means registering with local health authorities can take months or even years.

But under new rules that come into force this month, people who make use of the NHS in the UK will be asked to declare that they are ‘ordinarily resident’ in the country.

Those who live elsewhere in the EU, Norway or Switzerland, and who want planned treatment could find themselves forced to pay up-front.

Even expats seeking emergency treatment during short visits home could also face steep charges if they don’t have their paperwork from their new country in order, as the NHS seeks to claw back £500 million a year ($746 million, €695 million) in lost revenue.

Brian*, a 28-year-old diabetic, moved to Berlin in September 2014 and works as a freelancer. Because he doesn't yet earn enough money to cover his costs of living, he hasn't bought health insurance in Germany.

He stocked up on insulin before he left the UK, but planned to use the NHS on trips back to the home if the need arose.

He was unaware of changes to the regulations and bemoans the “terrible communication” that the government has on health care policies.

The new rules “leave me in a bit of a situation” he says. “It highlights the fragmented nature of European health.”

“I think the whole system is weirdly set up and puts small rules in place that contradict one another. When you leave the country you can vote for 15 years but at the same time you immediately get cut off from health care.

“Its symptomatic of the casual xenophobia of this government that as soon as people leave the country they pull up the draw bridge behind them.”

Long-standing European arrangements state that EU citizens should seek healthcare in the country they live in, regardless of their citizenship. They can seek healthcare in other EU countries, but this must generally be authorised and billed back to their country of residence.

But in a change to UK rules, expats who want treatment in the UK have to show a European Health Insurance Card (EHIC) issued by their new country.

Until this month, former UK residents were automatically entitled to use the NHS for free if they fell ill during a visit. In practice, many expats use the NHS for planned treatment too. But now this right is being removed.

The Royal Berkshire NHS Trust, one of 59 NHS Hospital Trusts in England, says on its website that patients who leave a debt could find their details registered with the UK Border Agency, meaning they could be stopped next time they try to enter or leave the country.

In an email to The Local, the UK Department of Health confirmed that there is no ‘grace period' following a move during which they can use the NHS – the moment they have left the country they lose their right to NHS treatment.

The new declaration could make it harder for expats to bypass the system, and new rules could leave expats with no option but to go private.

“We often hear from expatriates who question the need for international health insurance as they imagine they can return to the UK and fall back on the NHS or the State healthcare in whichever country they come from,” he said.

There was better news for British retirees in Europe. Anyone living in the EU and receiving a British state pension will be entitled to free healthcare in the UK, as long as they hold a valid S1 form, which is obtained from British authorities before moving abroad.

The move comes after the British government decided last year that it would stop paying the healthcare costs of UK pensioners who lived in other EU countries, leaving many facing big bills.

*Not his real name