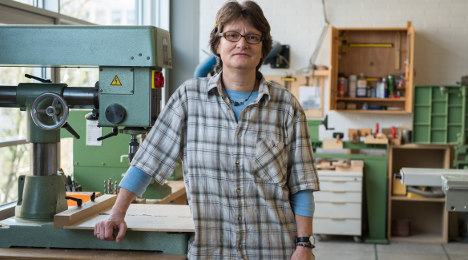 Edeltraud Walla in her University of Stuttgart workshop. Photo: DPA

“The gap in earnings between women and men is a great injustice,” Edeltraud Walla said.

The 58-year-old is a master joiner and head of the model-building workshop at the University of Stuttgart's architecture and urban planning department.

She found out quite by accident that she was earning 40 percent less than her male colleagues when the level of their salaries was included in a handout at a meeting.

University bosses say that Walla's lower pay packet is “not salary discrimination based on gender,” but a result of her different career path through the organization.

But she doesn't accept that she should be paid less as a master joiner than her male journeyman colleagues.

That's a view shared by politicians, with Minister for Women and Families Manuela Schwesig hoping to put together a draft law on equal pay sometime in 2015.

“I wish for that to become our reality,” Walla says.

Baden-Württemberg minister for women Katrin Altpeter agreed that “we've already seen that with the female quota [on company boards] nice words and voluntary commitments didn't advance the cause of women.”

She added that Walla had showed a lot of courage to bring her case out into the public eye through the courts and to keep fighting despite repeated defeats since 2012.

Statistics show that women earn around 22 percent less on average than men across Germany.

But in Baden-Württemberg the figure is closer to 26 percent, making Walla far from a one-off case in the state.

Germans are almost evenly divided over the prospect of knowing more about their colleagues' salaries, with around one third in favour of Schwesig's plans for wage transparency and slightly more against, according to a recent Forsa poll published by Stern magazine.