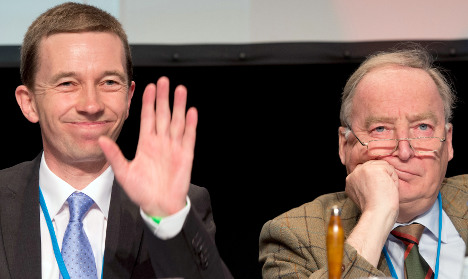 The fans demanded that Lucke leave the train and sang “We don't want any Nazis here!” reports express.de.

Lucke told the fans that he was on the train in a private capacity, attempting to enjoy a meal with his wife.

“I'm here privately with my wife, leave me alone,” he said.

Although the waiter in the carriage asked the men to leave, the insults kept pouring in.

“Because of the politics of your party, you have to expect what your getting,” they shouted.

Lucke then called the police, who had a word with the fans at the next station, which appears to have been enough to pacify them.

Although police were waiting at every further station, prepared to arrest the men, they were not needed.

Lucke exited the train as planned in Wuppertal.

Speaking to The Local, AfD spokesman Christian Lüth conceded the incident showed that the party has an image problem.

“Among the public there is this false perception that we are a party that hates foreigners,” he said. “It is is created by a hostile media who attack us because we are new. But many people simply want to believe in this perception.”

The media have seized upon the “black sheep” in the party to create a negative image of them, even though “the CDU has more of these kinds of people in its ranks then we do. But the media choose to ignore that.”

“We don't do enough to counter this image. But this year we have published detailed policies on immigration and refugees so that everyone can see what our position is.”

Could Lucke do more to improve his own image in the public eye?

The most recent polls have shown the AfD stuck on between 5 and 6 percent of the national vote, just above the threshold to enter parliament.

Internal conflict among the leadership of the party has been blamed for this downturn in the fortunes of a party that last year registered over 10 percent of the vote in three state elections.

Twice this year senior party figures from eastern Germany have sought to drag the party ideologically further to the right.

One of these, deputy leader Alexander Gauland announced in January that all immigration from Arab countries to Germany should be stopped because they are “totally foreign to our cultural tradition.”

Lucke, an economics professor who founded the party as a protest against the Euro, has struggled to assert his authority and keep the party ideologically moderate.

Nevertheless, this latest incident suggests that Lucke himself is being damaged by the more populist faction in his party.