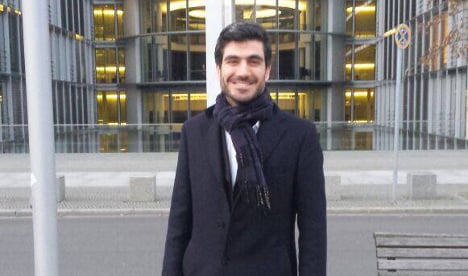 Thanasis Glavinas outside one of the German parliament's buildings. Photo: Private

A qualified lawyer with several years' experience under his belt back home in Greece, Thanasis Glavinas decided to take the plunge and move to Germany – like many other well-educated young Greeks of his generation – to study constitutional law.

Now he's an intern at the Bundestag (German parliament) in the office of Social Democratic Party (SPD) MP Burkhard Lischka – a job that seems to suit him, going by his relaxed air when he met up with The Local at a nearby coffee shop to talk about his experience in German government.

Although it's the first time Glavinas has worked in a national parliament, the contrast with the Greek equivalent he knows all too well from the media is stark.

“Here, any number of themes could come up: the minimum wage, internal security, the NSA. In Greece, we don't have these discussions – we just talk about the public finances," he said.

“We don't discuss the environment or sports or education – they're always side issues.”

That's not just a result of Greece's current financial difficulties, Glavinas said, but characteristic of the lack of organization the Greeks show compared with the Germans.

“The Greek parliament doesn't work in such an orderly way as the German,” he acknowledged regretfully.

“You can always find a way around, a new trick to use… there is no respect for the institution. You can insult people in the chamber, there are physical confrontations.”

Germany isn't without problems and debts of its own, Glavinas pointed out, but the better organization and higher respect for the workings of democracy – the “work with a plan and for the future, even the politeness the Germans show to one another” – would be a boon to struggling Greece.

Glavinas added that there's a more obvious careerism among Greek MPs than their German counterparts, meaning that the country fails to build for the long term.

“Of course German MPs think about their re-election just the same, they're self-interested, but they aren't as obvious,” he suggested.

One way that self-interest comes out is, unfortunately, in German politicians' attitude to Greece – where many simply follow the latest opinion polls, or the latest Greek-bashing headline from Germany's biggest tabloid Bild.

“The public is very negative about Greece,” Glavinas agreed. “It's reasonable for people to ask why they should keep giving money, but it's about solidarity within Europe.”

Glavinas and other Greeks are tired, he said, of hearing other nations' politicians trying to teach them lessons about how to run their country – especially for the young, who are the victims of decades of bad economic management coming home to roost.

“We don't want to be the first generation in history to live worse than their parents. But my generation has until now remained quiet. There's this stream of thought that Greece is a victim, that we're victims.”

That's what has led many young Greeks to flee abroad, especially to more prosperous fellow EU members like Germany, France and the UK, where they've been studying or finding work worth doing.

Outside Greece, there have been moments of further national humiliation for the new young diaspora.

Glavinas remembered one law lecture at Bonn University, when the professor asked students to name the 'worst' country to have joined the EU.

“Everyone unanimously voted for Greece,” he remembered. “I was very sad that in a public university where people are studying law, where they're educated, they say that Greece is a failed state.”

While there are no such outright painful moments in parliament, "of course, there are always comments… the Germans do make jokes," Glavinas said.

That's part of the reason why Glavinas is so certain that he wants to return home to Greece and live out his life there, like the vast majority of his generation of young expats who plan to bring what they've learned back home.

“This is a good thing for Greece,” Glavinas insisted. “There are lots of young people who've learned new things, new ways of thinking.

“All these educated people with PhD's, Master's degrees, work experience, they can go back to Greece and rebuild the state. But we need some motivation! That's where Europe could help, to encourage us and create jobs at home.”

Leaving the coffee shop opposite the Brandenburg Gate after the interview, Glavinas headed straight for the university bookshop on Friedrichstraße to boost his knowledge even further – and to be ready when the homeland puts out the call.