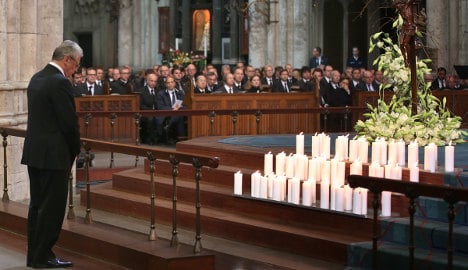 German President Joachim Gauck said that the nation was still in "enormous shock" over last month's Germanwings crash in the French Alps.

"We are all still in a state of enormous shock from what happened to us on March 24," he said as he presided over a state memorial service for the 150 people killed in the disaster.

"Since this day, nothing has been what it was for these families and friends" of the victims, Gauck said. "Something was destroyed that can never be healed again in this world."

Flags flew at half-mast nationwide for the 150 dead as political and religious leaders joined mourners for the service at Cologne's historic cathedral.

About 1,500 guests are present for the service, among them 500 relatives of the victims, in northern Europe's largest Gothic church, which is being broadcast live on screens outside the cathedral and to viewers nationwide.

Crowds have gathered in front of #Cologne Cathedral as the #Germanwings remembrance service begins #Trauerfeier pic.twitter.com/ok5Rb1qUvF

Ursula Mund, 53, had said this morning she would be among those watching on the large square in the city centre.

"Of course this is a special occasion. We have all talked a lot about what happened and are still baffled by it," she said.

"We are still saddened and I feel very moved today", she added.

Michael Senker, 62, said he would follow the ceremony on television.

"It's important to me to watch because all of Germany has been particularly affected by this tragedy," he said.

"We all feel touched by this horrible catastrophe."

Co-pilot Andreas Lubitz, who had been diagnosed as suicidal in the past, is believed to have intentionally flown the plane into the mountainside after locking the pilot out of the cockpit.

He was receiving treatment from neurologists and psychiatrists who had signed him off sick from work a number of times, including the day of the crash.

Aviation industry doctors have since demanded that German pilots undergo more extensive medical checks, while several airlines worldwide have changed rules to require two crew in cockpits at all times.

Spohr, who is grappling with a heavy blow to the airline's image, had asked Lufthansa pilots in attendance not to wear their uniforms to the ceremony out of respect for the victims.

A 55 year-old women was apprehended by Cologne police after she tried to gain access to the memorial service using a fake pilot's uniform and fake Lufthansa staff-ID.

Police stopped her and checked to see if she really did work for Lufthansa and discovered that she was lying.

"The woman had no official papers" a police spokesman told Kölner Rundschau. She was led away and later released after the service had finished.

This isn't the first time that somebody has tried to deceive the authorities in relation to the crash. Last week it was revealed that a woman pretended to be a relative of one of the victims of the crash in order to get free plane tickets. She is now facing legal action by Lufthansa.

Mourners began leaving flowers and lit candles on the stairways leading to the cathedral, and outside the city's main railway station nearby.

A bouquet of a dozen white tulips left at the towering cathedral had a card bearing the message, "Depression is incalculable," referring to Lubitz's illness.

A white flag emblazoned with a black cross hung outside the cathedral, while in front of the altar 150 candles were set up, one for each of those killed.

The memorial service will be led by the Archbishop of Cologne, Cardinal Rainer Maria Woelki, and the head of the Protestant Church of Westphalia, Annette Kurschus.

Woelki urged compassion for all the dead, including Lubitz: "There are 150 victims," he insisted.

The Germanwings Airbus 320 was en route from Barcelona to Düsseldorf when it crashed in the French Alps on March 24, killing everyone aboard, including 72 Germans and 50 Spaniards.

Germany was especially devastated by the loss of 16 students and two teachers from a high school in the small town of Haltern as they returned from a class trip to Spain.

Business executive Peter Eiglmeier said he had driven to Cologne from the northern city of Hamburg to take part in the public show of sympathy.

"I lost two children myself a few years ago. My thoughts go out to the parents of those kids on the plane," the 57-year-old told AFP, fighting back tears.

Loved ones of victims previously attended a memorial event near the disaster site, at the village of Le Vernet in the French Alps.

On April 13, the foreign ministers of Germany, Spain and France also paid tribute to the victims at Barcelona airport, where the passengers embarked.

Cologne Cathedral was constructed over more than six centuries between 1248 and 1880. Despite several hits, it survived Allied bombing that levelled much of Cologne in World War II. It was listed as a UNESCO World Heritage site in 1996.