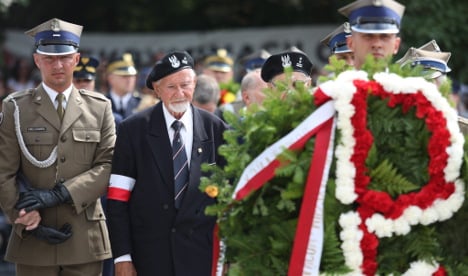 Twenty former insurgents received the Federal Cross of Merit from the German ambassador to Poland, Rolf Nikel, at a ceremony in Warsaw.

"You experienced the force of an inhuman regime that treated its opponents ruthlessly," Nikel told the wartime fighters.

Now "you show that reconciliation is possible, when the victims shake hands with the descendants of the criminals of the past."

Around 50,000 insurgents took up arms against the Nazis in the occupied Polish capital on August 1, 1944 as the Soviet Red Army was poised to invade.

The failed two-month rebellion sparked bloody Nazi reprisals, destroyed much of Warsaw and left 18,000 Polish fighters and 200,000 civilians dead. Another 500,000 survivors were deported.

"We had mixed feelings. We hesitated over whether to accept the award," said 86-year-old Leszek Zukowski, who participated in the revolt.

"We didn't do anything for Germany — we fought for Poland," he told AFP.

He said they decided to accept the award "for the sake of the future, for reconciliation, for cooperation between our countries."

The idea to honour the Polish fighters came up last year when Polish President Bronislaw Komorowski visited Berlin for the unveiling of an exhibition on the Warsaw Uprising on its 70th anniversary.

Komorowski was joined by former fighters who for years have been talking to German youths about their experience to warn them against the dangers of war.