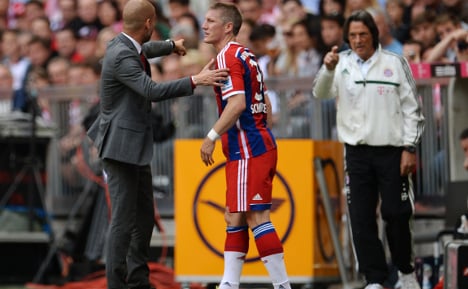 Tension on the touchline: Guardiola, Schweinsteiger and Müller-Wohlfahrt Photo: DPA

Müller-Wohlfahrt, 72, has been at the club since 1977 but has brought his 38 years of service to an end after resigning over a "breakdown in trust". Three other members of the club's medical team have also stepped down from their positions

In a statement explaining his resignation the now former club doctor said: "After the Champions League game … the main blame for the defeat was put on the medical department for reasons we don't understand."

On Wednesday FC Bayern suffered a surprise 3-1 defeat away to Porto, which leaves them with an uphill task in the second leg at the Allianz Arena.

They need to win by two clear goals to progress to the semi-finals, but because of the away goals rule, a Porto goal would mean that Bayern would have to score four to go through.

Despite the fact that all of the Porto goals were caused by individual defensive errors, manager Pep Guardiola bemoaned the long injury list after the defeat, which appears to have been the final straw for the medical staff.

The number of players out is unusually high, with the Germans champions missing star players Franck Ribery, Arjen Robben, Bastian Schweinsteiger, David Alaba, But this is not the first time that tensions have appeared between Guardiola and Müller-Wohlfahrt.

More recently during a German Cup match against Bayer Leverkusen, Guardiola turned round and sarcastically clapped the medical team when Medhi Benetia suffered a muscle injury. (see below)

Müller-Wohlfahrt has resigned before. He quit in 2008 after an argument with then manager Jürgen Klinsmann. He returned to his position upon Klinsmann's departure.

He is also the doctor for the German national team and will continue his work with "Die Mannschaft", meaning he is likely remain close to key figures in the dressing room like club Captain Philip Lahm and vice-captain Bastian Schweinsteiger.

After having fallen out with such an icon of the club, Guardiola has once again put himself under greater pressure at a club where tradition and historical figures like Franz Beckenbauer have such influence.

Unsurprisingly Twitter responded to the news in amusing fashion