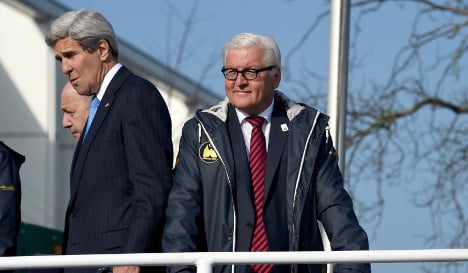 The top diplomats, gathering in Lübeck in northern Germany for their second meeting since the expulsion of Russia from their ranks last year over its annexation of Crimea, said: "We stand united in our conviction that the conflict in Ukraine can only be solved by diplomatic means and in full respect for international law, especially the legal obligation to respect Ukraine's sovereignty, territorial integrity and independence."

German Foreign Minister Frank-Walter Steinmeier hosted four-way talks in Berlin Monday with his counterparts from Russia, Ukraine and France to assess the shaky truce in eastern Ukraine, which has been marred by deadly clashes in recent days.

They produced a renewed commitment by the parties to the ceasefire, and an expansion of its pledge for a withdrawal of heavy weapons from eastern Ukraine to include lighter artillery and armoured vehicles.

The foreign ministers also said that Russia can only expect international sanctions against it to be lifted when it complies with the terms of a ceasefire with Ukraine.

The top diplomats, gathering in Germany for their second meeting since the expulsion of Russia from their ranks last year over its annexation of Crimea, said the truce agreed in February in the Belarussian capital of Minsk must be respected.

"Sanctions are not an end in themselves; their duration should be clearly linked to Russia's complete implementation of the Minsk agreements and respect for Ukraine's sovereignty," the ministers said in a joint declaration.

The G7 is a grouping of leading developed economies — Britain, Canada, France, Germany, Italy, Japan and the United States.

Formerly the G8, the grouping was reduced to seven members in 2014 after Russia's annexation of Crimea.

Steinmeier said that the G7 partners were in agreement that Russia could only expect to rejoin the club if the Ukraine crisis were defused.

"There is no interest in any type of containment or even isolation of Russia," he told reporters at the G7 meeting in the northern city of Lübeck.

“We would like to see conditions that would allow Russia to again be a member of the G8 and take part in G8 meetings.

"But it remains the case that this can only happen with the application of the Minsk accords and the resolution of the Ukraine conflict and in particular the fulfilment of the obligations that Russia itself committed to."

The US and the 28-member European Union have forged a united front against Russia, slapping it with several rounds of sanctions, and Canada and Japan have levelled their own punitive measures against Moscow.

The Lübeck meeting was aimed at preparing a G7 summit in Bavaria in June.