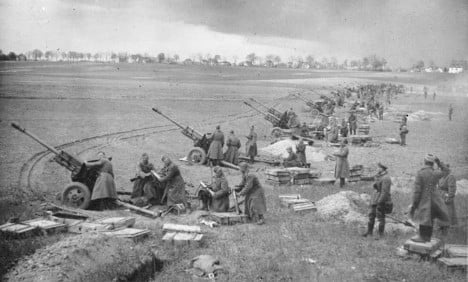 By this point in the war the Soviet army had reached the Oder River, which runs north to south about 60km east of Berlin on what is effectively the modern day Polish border, and the Americans and the British were approaching from the west.

Early in the morning of April 16th 1945, the Red Army launched the largest artillery bombardment in military history. 9,000 artillery guns spread across a 30km long line rained shells and rockets on the German trenches.

The total number of soldiers across the whole Soviet front amounted to about 2.5 million, with about one million of them deployed at Seelow Heights. The Germans were outnumbered ten to one.

The main offensive from the east was supported by another attack from the south.

Soviet advances were initially slow, because the Germans had retreated from the front line of trenches and responded with a counter-barrage causing many Soviet casualties. The swampy ground also slowed down the Red Army's progress. Despite early stagnation, it only took three days to break the final German defences. Seelow Heights was the last defensible position to the east of capital, and was nicknamed the "Gates to Berlin".

The Soviet victory meant that on the April 20th they had surrounded Berlin and could launch the final assault on the city.

German forces could only put up a feeble defence of Berlin. By this point the German army consisted of depleted, badly equipped, and poorly organized Wehrmacht (regular army) and SS divisions, as well as foreign volunteers, "Volkssturm" militia, and poorly trained Hitler Youth members.

The chaos in Berlin is depicted in the well-known German film "Downfall", including the hopeless task of defending the crumbling city given to the youngest generation.

Only two weeks later the Red Army had taken the capital, Adolf Hitler had committed suicide, and the war in Europe was effectively over.

Because Stalin was so keen to win the war before May 1st, an important national holiday in Russia, the Red Army suffered an unnecessary number of casualties in what was some of the fiercest fighting of the final phase of the war in Europe.

There are large discrepancies between different casualty estimates for the battle.  Russian historian Aleksey Isaev says the Soviets lost 20,000 men – quite low compared with other estimates for the whole Berlin offensive in total, which range anywhere from 80,000 to over 300,000.

Other estimates suggest that 12,000 German soldiers were killed, with the German media often giving the total number of casualties on both sides as 80-100,000. In recent years, Seelow has become the centre of controversy over neo-Nazis, who have marched through the town to "commemorate the heroes", who died during the battle.

Such marches have been banned by the Supreme Court, but neo-Nazis have continued nonetheless.